Both the Cancer woman and her Pisces mate are as fluid as the ocean, which means they understand each other’s mood swings. He is idealistic and dreamy, while she tends toward emotional outbursts. But since they are both highly intuitive, they know what’s going on with their partner immediately and can move quickly to resolve the issue in this Cancer compatibility.

The Pisces man is easygoing and can flow with her changing feelings, while she is caring and nurtures his every desire. And neither one makes decisions lightly – she is very analytical and he is careful and meticulous.

When the Cancer woman and Pisces man finally agree to take the next step, they are both sure it is the right one. She is extremely loyal to her partner, and he returns the devotion. The Cancer woman Pisces man couple are like two sides of the same coin as they take turns guiding each other toward a stronger union. Dating a Cancer woman is easy for the Fish.

And there is no place better to strengthen their bond than in the bedroom. The Cancer female in love is a generous lover, he is a generous lover, and they enjoy pleasing their partner in every aspect of their lovemaking. His emotional release matches hers, except he enjoys fantasy and creative foreplay.

This is something new for his Cancer lover, as she is more reserved in her lovemaking. But she is willing to go along once the Pisces male sexually pledges his undying love and affection for her. This is all the protection she needs to go the distance with her Pisces mate. And because he is soft and gentle with her, he doesn’t mind when the Cancer woman sexually wants to take the lead in their sexual endeavors which makes her feel more safe and confident.

Both the Cancer woman and Pisces man are romantic and enjoy intimacy over pure lust or passion, which creates a more sensual experience between the sheets. His compassion rivals hers, making their love compatibility a match made in heaven. 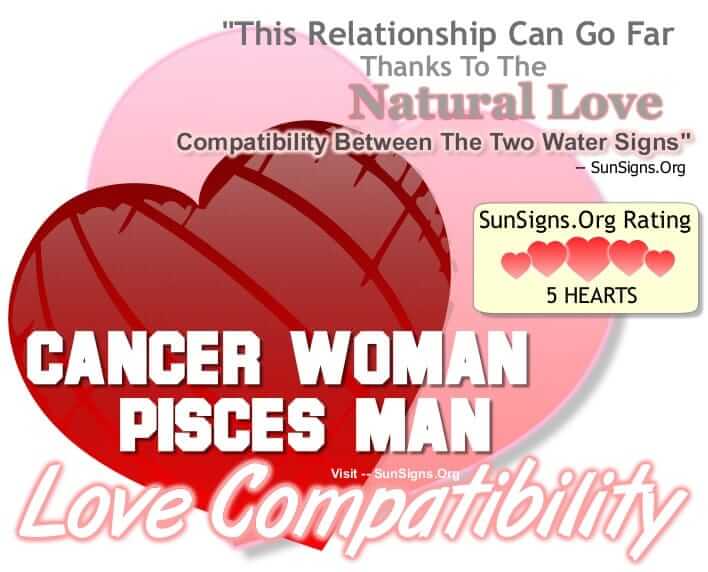 But as with any relationship, there may be some obstacles along the way for the Cancer woman Pisces man union. While he makes her feel secure in many areas of their life, the Pisces man is not typically obsessed with success or finances. This can be a sticking point for the Cancer woman, as she strives to create a stable and comfortable home life for her and her partner. This is the same when dating a Pisces man.

He enjoys the comforts of home as well, but he isn’t as practiced at providing them as she is. She will have to help him in achieving his lofty goals, but he will acknowledge and appreciate her efforts. He, in turn, will come to understand her nagging as her way of trying to resolve a potentially sour situation in this Pisces compatibility.

The Pisces male in love can be even quieter than his reserved Cancer partner, and she may demand more communication from him about his feelings toward her. This can be off-putting to him at first, which might cause a rift between these normally loving sun signs.