How good or bad is the love compatibility between an Aries and Capricorn emotionally, mentally and sexually? Read on…

Aries and Capricorn love compatibility is difficult but not impossible. These two star signs have very different perspectives on almost everything concerning their lives. Aries is controlled by impulse and does not care about the aftermath of his/her actions. They are very vigorous and moves toward his/her target promptly.

In the Aries Capricorn compatibility, the goat looks at issues carefully going to excruciating detail to make sure the outcome outweighs the risk involved. They are sluggish and pay attention to very small unnecessary issues. He/she will avoid unnecessary risks to accomplish a certain goal. They are very focused when it comes to career and dreams. He/she knows where he/she is going and how to get there. This is unlike Aries who does not care much about the method of going where he wants to be at.

In the Aries Capricorn relationship, the Sea goat is the mute one. He/she is less outspoken and more of a thinker. The Ram is extremely talkative and can get very loud. This two are assertive. They believe that they are right and their method best suits the situation. Here they tend to argue. It is advised that they discuss issues and come to a consensus. They both need to compromise when need be.

Aries likes the shorter less tiresome way while Capricorn will follow instructions to the end assuming that this has been proven the best way with less risk. When the Aries is dating the Capricorn, the Ram will want to initiate sex earlier as he/she is driven by this sexual urge. Capricorn on the other hand will be more reserved. He/she will learn the other person slowly and carefully to make sure he/she is the right partner. Capricorn will have to establish the potential of this partner to take him/her to greater heights. 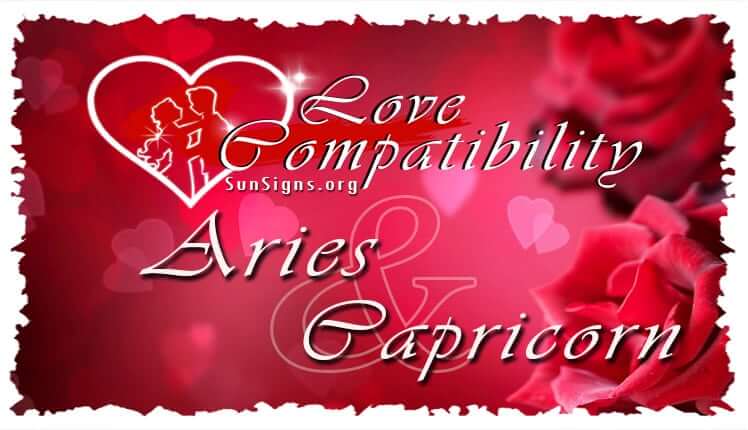 Capricorn should only help Aries choose what he/she wants and not openly choose what he/she finds okay for Aries. Another smart way to go about this Aries Capricorn love compatibility is to make the Ram think that he/she makes the decisions when its Capricorn who influenced them. This way Aries will feel valued and heard preventing all the drama.

Capricorn and Aries compatibility make a good team at work. If they work together in a business, it can be a great success. This is because the two of them are very hard working. Capricorn will be the one leading from the backstage.

Aries really puts a lot of effort in personal businesses so they will put their all in it. Aries will come up with ideas while Capricorn finds ways to implement them. These two zodiac signs usually seek to maintain their over the top lifestyle. So they will work tirelessly to make money.

Aries is a symbol of fire while Capricorn is a symbol of Earth. Aries will blaze on and on. Capricorn will be less active and more reserved. They will analyze the possibility of self development. Arians will seek satisfaction of monumental needs.

Aries and Capricorn compatibility both signify basic. This means that they both come up with ideas. However, the two will have very different goals. Hence it is important to discuss and agree who does what in the relationship. Aries is dominating and will take the lead. Capricorn leads from back stage. If the Aries Capricorn soul mates work together and accomplish their goals this will be a celebration!

Aries and Capricorn in bed are very unpredictable when they are under the covers. Aries may like everything done in a rush but this is not so in bed. Aries wants to be torched with affection; he/she wants sex to be sweet and slow. Capricorn will follow Aries lead. He/she will only do what Aries allows.

Capricorn is very last century and want things done the old way. He/she wants sex in the bedroom, food in the dining area and television in the sitting room.

Aries is new and fresh and is all trendy.  On the other hand, they want sex in the office, food in the bedroom and television everywhere. This makes this two very opinionated. It could cause a lot of misunderstanding. These two have to come to a consensus. Capricorn has to let the past be history and let it stay in the past where it belongs. Aries has to bear with their and go slow with all the radicalizing especially when they move in together.

Capricorn is a book of wisdom and Aries is a bottomless pit of immaturity. Capricorn may find the ram very unreasonable and incapable of making decisions. This knowledge of theri childish nature will push the Goat to make decisions for Aries. This may not be the right move because Aries will feel undermined and disrespected not to forget disregarded.

Diplomacy is foreign to Aries as it is known to Capricorn personality. Arians are blunt and very straight to the point. He/she says it as it is and does not sugar coat the truth. They may come off as inappropriate and insensitive towards the fragile Capricorn. Aries may say something as a joke but it will not tickle Capricorns sense of humor, but it will infuriate him/her.

Aries is oblivious of this feelings and may not understand the sudden change of mood and resentment from Capricorn. In the Aries Capricorn compatibility, the Ram should know that the goat gets offended at any remarks of negativity. This should be a warning to slow down because if they doesn’t stop,  Capricorn will continue harboring anger and within no time, the ticking time bomb will explode. This will be very bad for the relationship and end in a breakup of the Aries Capricorn love friendship or marriage.

Aries also has enough stamina to make dreams materialize. They are a better combination in the field than in bed. They do not give up. The problem is that both insist on issues hence are prone to revenge and unnecessary violence. Aries has to slow down on the rivalry and Capricorn has to keep up with the energy for this relationship to work.

Victims of this nature of Aries and Capricorn compatibility have work to do. You need to get your head in the game. Show interest in your partner’s ideas as senseless as they seem to be. Be supportive of his/her dreams and he/she will thank you later. Enjoy yourself while at it. Do not pretend to be someone else for him/her to like you. Let yourself flow with the love. Let somethings slide because arguments are never worth it. Last but not list, let him/her take the lead at sex-time!