Are Aries woman Leo man a good match mentally, emotionally and sexually? One might think the union of the Aries woman and Leo man soulmates would burn right down to the ground. But the male lion is such a dominant force he entices the female ram with his strength. Here is finally a man secure enough to capture her. Read on to know more about the Aries woman Leo man compatibility. What is the best sign for an Aries woman to marry? Leo man!

Although both the Aries woman and Leo man in love possess a charismatic personality, the lion is a natural born leader. He automatically takes charge in any situation, and the female Aries is drawn to his masculinity and stamina. The Leo man in love is loyal, sensible, honest, and romantic, and will lavish his Aries lover with his generous nature. She, in turn, offers him the strong and passionate woman that will keep him satisfied in the home and the bedroom.

There are fiercely loyal sun signs are, and they will stick by each other through the toughest of times. He will create a stable home environment, and she will help him defend it. In the Aries woman and Leo man friendship, both have a protective nature about them, which gels nicely when they are protecting the same thing.

It’s the physical and mental prowess of the Aries woman Leo man relationship that offers an equally satisfying time in the bedroom for both the star signs alike. The Leo man sexually provides her excitement and intensity, and she responds in kind, allowing him to take the reins and lead her to incredible pleasure. He admires her beauty and spontaneity, and the Aries woman sexually returns his incredibly romantic gestures. 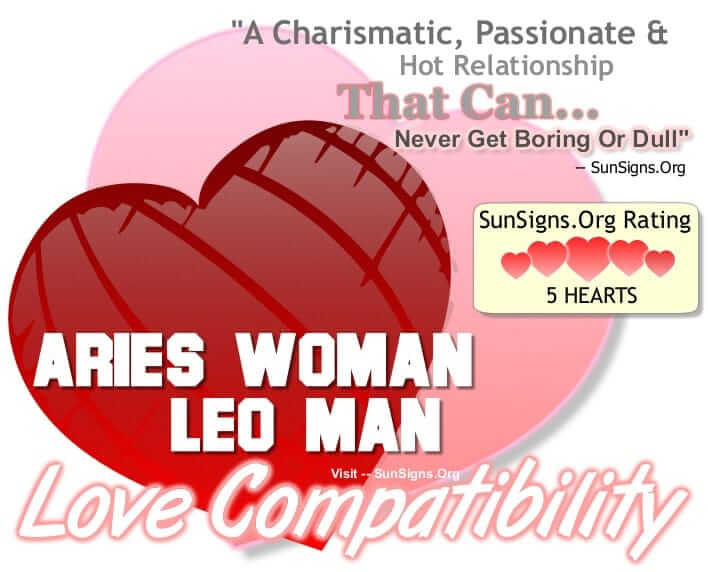 And they are almost always on the same page with each other, since they value similar things in life. Both the Aries woman and Leo man in bed need change and excitement to keep from growing sexually stagnant. The Aries woman and Leo man offer that to each other in spades on a regular basis. Because of this, their daily routine will never be boring, and their weekends even busier!

This suits both the Leo male and the Aries female just fine, as long as they are building towards something together. The same thing is true in their careers. Because he is attracted to power, as is his female counterpart, they will do whatever is necessary to achieve success.

When the Aries woman is dating the Leo man, the Aries female’s selfishness may catch the Leo male off-guard at times. But he is stable enough to look past this imperfection.

There may be times when their egos clash in the Aries woman and Leo marriage. But this will only help to further the passion once they makeup and come back to each other even stronger. As long as he remains affectionate with her, the Aries zodiac sign woman will take her cues from him every time. But if he begins to wane in his displays of love, she will grow restless. She will require more of a challenge in their lovemaking if they don’t want to break up.

Likewise, his bluntness may bring about her quick temper without him realizing it. But if the Aries woman in love is truly devoted to this lion, she will recover just as quickly. For even though she is often the domineering one in the relationship, the male Leo is a perfect match for her mental and physical prowess.

Although the Aries woman Leo man couple understand each other’s needs, the Aries women will still retain their sense of independence, while the Leo men call the shots. But once they come back together, the fire they ignite will burn brighter than ever in this Leo compatibility.