Uranus in the Seventh House of the Natal Chart

What does Uranus in the 7th House mean? These people might not be sure of their decisions in life.

You feel torn with Uranus in the Seventh House because you generally enjoy being in a relationship. But your need for personal freedom is relentless, and you sometimes want to break free of such a commitment. The key is to find someone else as strong and independent as you are.

Planet Uranus is all about creativity, rebellion, and originality, and you have the unique ability to look at a situation from all sides and come up with the perfect compromise. Your creative angle comes from a desire to see justice done wherever you go. You hate when things are off-balance, and you work tirelessly to put them back on track.

This sometimes means having to think outside the box, which is Uranus’s specialty in 7th house astrology. While some people may question your unique solutions, others who know you well understand there is a method to your madness. And that method often gets great results. 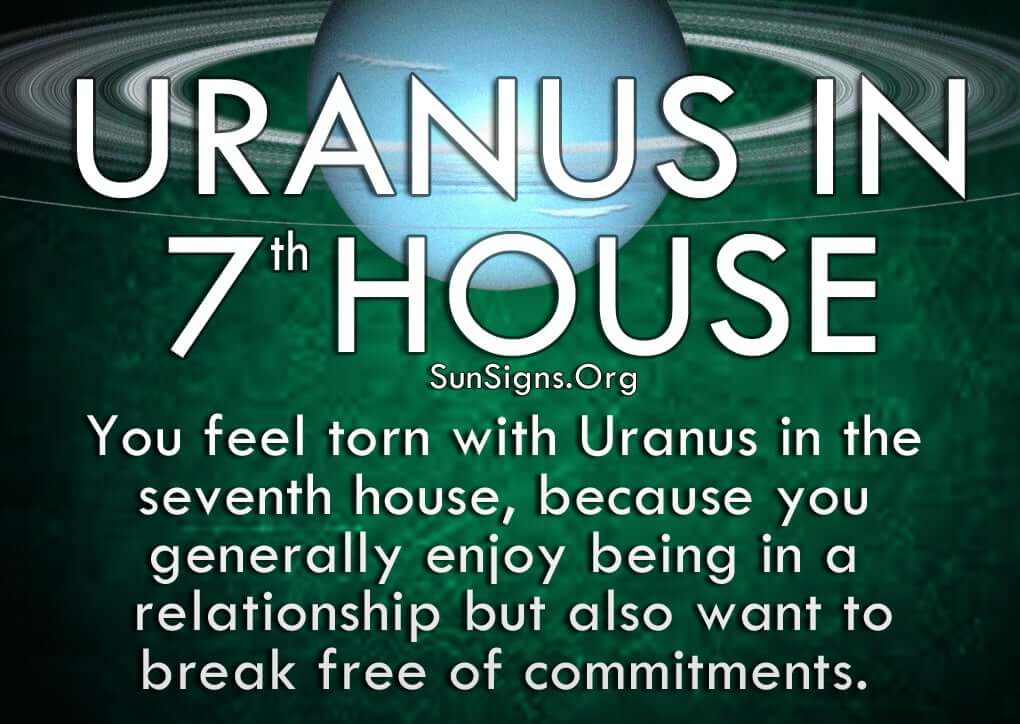 Uranus in 7th house effects shows that you shouldn’t sell yourself short when it comes to speaking your mind and expressing yourself. Have more confidence in your opinions and allow yourself to make a choice. People will respect you more for it, and that will add to your confidence level. Believe in yourself and your skillset. Your intelligence and your genuine personality can win anyone over. Just rely on your wit and your charm, and you will go far.

As for your partner, make sure you don’t go overboard on flirting with other people. While you are fun-loving and spirited, someone else may get the wrong impression and think you’re coming onto them. And you may not realize that until it’s too late. Make sure to keep your social self in check when you’re in a relationship.

The only place people with Uranus in the 7th House have trouble applying their principles is in their own life. While you can help other people with their problems, you have difficulty making decisions when faced with a tough choice. Your indecisiveness can drive people crazy when you always look to them for the answer. (As Libra is your ruling zodiac sign).

This is also true when you’re in a partnership. You tend to defer to your mate’s wishes rather than coming up with an idea of your own. And this leads to conflict, for the Uranus sign is all about coming up with new and creative ideas. At times, Uranus in the Seventh House may make you feel as if you’re cheating yourself in such an arrangement, but be strong. Just because you’re with someone doesn’t mean you have to lose yourself in that person.

In Astrology, Uranus is different from all the other planets. It is associated with freedom, rebellions, rapid changes, revolutions, and innovations. Uranus was discovered in 1781 and is the ruling planet of Aquarius. With Uranus in your birth chart, you are sure to make progress in life.

Uranus natives always work towards finding out the truth on their own. They do not rely on others for answers to their questions. Is Uranus in the 7th House good or bad? This placement is good for you because it will teach you the importance of partnerships and teamwork.

Uranus in the 7th House Meaning

Uranus in the 7th House horoscope is a difficult planet to work with. It is eccentric and exhibits unpredictable energy. The Seventh House is all about committed relationships and partnerships. Uranus is a planet that hates compromises, so people with this planet’s influence find it hard to cooperate with others.

Uranus in Seventh House man and woman struggle to create lasting partnerships. You do well in so many aspects of your life, but problems come up when it comes to working with people. You tend to have connections with people later in your life.

Uranus in 7th House love life is somewhat interesting having that; in this placement, you tend to get attracted to people who have Uranian traits. It is hard for you to associate with people from other planets having that you cannot communicate and interact on the same level.

You are attracted to Uranian natives because they are intelligent and eccentric. Being around like-minded people is what you want, but you are always emotionally unavailable.

A healthy relationship is when two people complement each other while being able to maintain their identities. Don’t shy away from a good thing because you’re afraid of where it will take you. Revel in the fact that you have a partner to bring along on your journey, one who wants the same things out of life that you do.

Use your great communication skills to make sure you are both on the same page. Then there will be no doubt where you two stand with each other, and you won’t have to worry about feeling tied down. You should feel happy that there is someone out there who enjoys your many quirks and idiosyncrasies. Those are the things that can either make or break a relationship. Be patient with your partner’s quirks as well. Get your free Mars Venus love reading to know more.