What Is Xuan Kong Feng Shui?

The art of Feng Shui began in China and has been around for millennia. It was initially restricted to the emperor of China and his lineage. In recent years, it has spread into Western culture. While sharing cultures can be a beautiful thing, those who are only interested in Feng Shui as a fad do it a great disservice. To truly understand what it is and where it came from, one must look to history.

It has been said that if one does not use both parts, one will not reap the real benefits of this practice. This particular branch of Feng Shui began in the Qing Dynasty, and it has been veiled in secrecy most of the time. To the Western mind, it is still difficult to understand. It all comes down to balancing Qi, or energy, numbers, elements, locations, and stars (hence the “flying stars” name).

Like all forms of Feng Shui, Qi is the most critical part. It can be translated into many English words, such as “air,” “breath,” “energy flow,” or “life force.” In other words, English does not have an exact equivalent to the word, but several words give a general idea.

When one can control his or her Qi, one may invite good health, wealth, and fortune. Of course, the opposite is also right. The goal is to find and maintain balance.

#1. Principle of Yin and Yang

One may not have light without dark, for instance. What may surprise Westerners is the fact that these forces are not opposed to each other, but complementary.

One may not exist without the other. The yin is considered passive, dark, and feminine, while the yang is active, light, and masculine. These forces must be in balance.

Next is the principle of the five elements. They consist of earth, metal, water, and wood, and fire. Each feeds into the next. It is important to remember this. Earth brings stability and steadiness.

The shape associated with earth is a square. Not surprisingly, colors associated with the earth element are browns, terracotta, and yellows. There is a reason why these colors have been called “earth tones” for so long. Earth creates metal (as in ores we dig from the earth). Metals convey potency and vigor.

The shape of metal is round. Its colors are gold, silver, white, and gray. Metal contains water. Water suggests motion. The shape of water is a swirl or curve; anything that conveys its motion. The colors associated with water are darker shades of blue and black because they remind one of the ocean. Wood grows from water.

Like the living, growing things wood represents, it reminds one of expansion and vitality. The shape of wood is rectangular. Rather than browns (those are earth colors), wood colors focus on greens, like one would find in leaves and growing things.

Lastly, wood feeds the fire. When we say someone has a “fire in his belly,” we generally mean he is full of passion. The element of fire is no different. It means passion, energy, and emotion. The shape of fire is a triangle symbol. The colors of fire are reds, oranges, purples, and pinks.

Numbers are very important in Feng Shui, especially this form. The Lo Shu Square is a complex concept based on the number three. It is considered magic, and it has to do with geomancy or the art of positioning buildings  favorably.

Once again, it all comes down to a favorable flow of Qi. The square is created by placing four even numbers in the four corners and filling in the rest with odd numbers. The center number is always five.

The rows and columns are always three numbers total. The sum of the two numbers across each other from the five is always 10. The total number when rows or columns are added comes to 15. Each number has a special meaning. In addition, each number or combination of numbers corresponds to an element.

As for location, depending on where and what one’s house faces (such as a quiet pasture or a busy street), it is said to have a yin or a yang nature.

The quieter the energy, the more it is said to be yin. The busier it is across from the facing side of the building, the more yang it has. Knowing which one has is important. That way, one will know how to balance the Qi.

Lastly, the most important thing that sets Xuan Kong apart from other forms of Feng Shui is its use of the Nine Palace Flying Stars or Jiu Gong Fei. The chart incorporates numbers (or stars) from a Lo Shu Square, called the base star, the facing star, and the sitting star.

Step one is to find out when the building was first occupied. Step two, decide what direction the home faces. Step three, using the Lo Shu square, determine the Qi of the home. Remember, the square contains nine numbers, which become the nine stars.

The way step three is accomplished may seem complicated, but if one takes the time to research and understand the reasoning behind it, the step will make more sense. When the building was occupied establishes the number used for the base star.

From there, the direction the building faces determines the number used for the facing star. The sitting star is opposite of the facing star at all times.

The facing and sitting stars may “fly” in a yang pattern (ascending) or a yin pattern (descending). Which order one follows depends upon whether your numbers are even or odd.

The stars are not limited to determining house placement of positioning of objects and colors in the home. They each have a meaning, both on their own, and in certain combinations. There are “timely” and “untimely” flying stars. 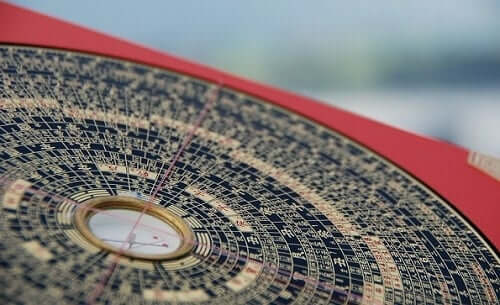 Be aware that there are many sites on the Internet that will only give one part of the picture. There are also self-proclaimed “experts” who are happy to take one’s money. One bit of good advice? Look for reputable books written by practitioners who have studied the art for many years. Doing research first will ensure that your project will be done the right way. Know in advance that there are differing views on how to accomplish one’s goals, but it all comes down to good energy, good fortune, and a good life.