Scorpio Woman And Taurus Man – A Match That Clashes Or Connects

How compatible are Scorpio women and Taurus men mentally, emotionally and sexually? Being at opposite ends of the zodiac, it may seem like the Scorpio woman and Taurus man have very little in common. As a water sign she is deep and mysterious, while he as an earth sign is grounded and steadfast. But polar opposites can attract at times.

As the more social of the two sun signs, the Scorpio woman will make the first move on the Taurus man and she won’t be disappointed. He is very knowledgeable and she is instantly impressed by his intellectual pursuits. He, in turn, is attracted to the ease and confidence with which she carries herself.

Taurus men love beautiful things, and Scorpio women are inherently sensual and alluring. He can keep up with her flirtatious banter, although his responses are more level and contained. She can’t rattle him, and this heightens her interest in him even more.

The Scorpio woman is extremely passionate and holds nothing back between the sheets. Thankfully the Taurus male has the stamina to match, and begins their lovemaking at a slower and more romantic pace. He’s not as rambunctious as she is, but he does offer a solid foundation off of which to build their sexual relationship.

And the Scorpio female will ride that bull hard, tossing around her hair and throwing caution to the wind. This may be a bit overwhelming for her Taurus partner at first, but he can certainly keep up. But if she wants to completely satisfy him, she will have to tone down her lust and try to match his more sensual approach.

The Taurus man, then, may have to turn up the heat once in a while to keep her interested. If the Scorpio and Taurus zodiac signs can reach a balance, they will have a most gratifying sexual union. It will just take work to maintain it. 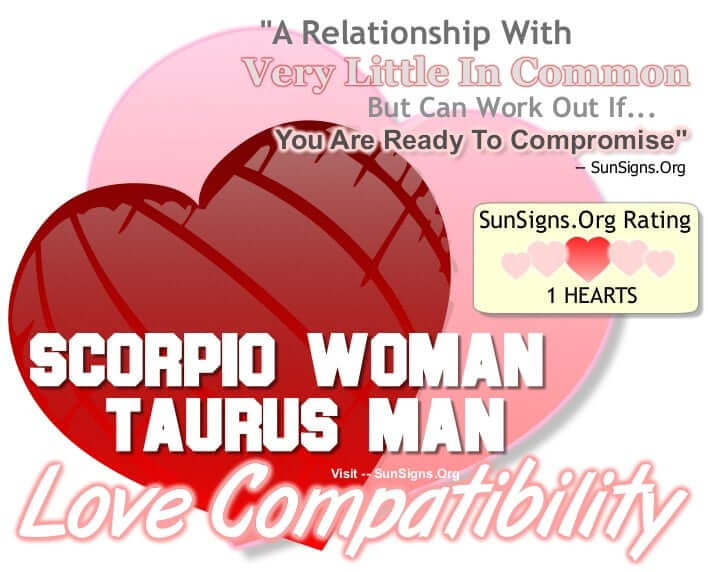 As much as the Taurus male tries to figure her out, he notices that Scorpio woman is holding something back and this may be frustrating to him as the relationship continues. He’s not into playing games so she will have to be more forthcoming if she wants there to be a future between them. But there’s no question that the Scorpio Taurus couple are intrigued by each other, and they will choose to move things into the bedroom.

The Scorpio woman likes to be in control of any situation, and her relationships are no different. Thankfully, the Taurus man trusts her enough to relinquish control in some areas, but he still wants to keep his hand in other things. Because he is a cautious man, she knows he won’t rush into anything foolish and can rely on his solid decision-making skills.

But at times the Scorpio woman Taurus man pair will disagree, and he as the more logical of the two will not back down in his point of view. This will bring out her stinger immediately, and he will patiently argue with her for a time. However, he also his breaking point and that’s when she will meet with his outrageous temper.

It will be a battle of wills until these two sun signs can reach a compromise, if they can reach one. But if they learn to work together they will be able to rely on their partner’s strengths and deal with their weaknesses. For once both of these signs commit to their partner, they are in it for life.