What Is The Solar Plexus Chakra?

How to Understand And Balance the Solar Plexus Chakra

If you’ve ever been punched in the stomach, you know exactly where the Solar Plexus Chakra is. What is it, what does it do, and how can you use it to your advantage?


The solar plexus chakra is located approximately one fist-width below the little knob on the bottom of your sternum. It’s in a soft, relatively unprotected portion of the body, and as such, everyone knows that it’s the place to try to protect when you happen to find yourself in a fight. This is the chakra that governs self-identity and ego.
advertisement
advertisement

It is appropriate that the ego is in the lower chest, especially because when one is confronted with opposition, the natural, instinctive reaction when fighting back is to puff out one’s chest. This chakra deals heavily with volatile, fire-like energy that gives the self its solid position and identification.

It is the chakra that is perhaps the most shocking to open, as well – where the third eye chakra might allow you to perceive the world differently, and the root chakra might alert you to the universal state of being that all life extends from, it is this chakra that truly allows you to discover who you are, just you, in relation to only yourself and nothing else.

A blocked solar plexus chakra can manifest in one of two ways: a dam, or a broken floodgate. Whether a person is introverted or extroverted has no bearing on this chakra, so make no mistake about that when you read this next set of warnings. Someone with a dam-like block will see themselves fleeing from others, seeking solitude, and failing to make their identity a prime factor in their life. 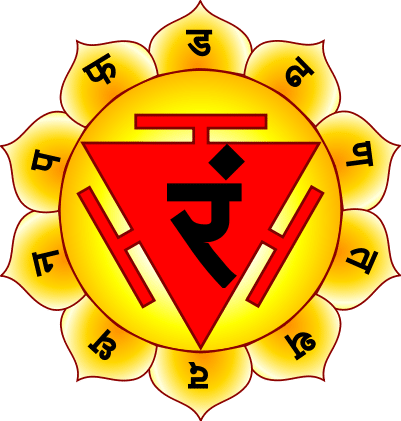 This is primarily read by someone who simultaneously hates human contact, but longs for social stimulation. They are in an uncomfortable position in both sides: hiding away, or being sociable. Again, this is not to indicate that introverts have a blocked solar plexus chakra! Introverts do not hate human contact, they merely are exhausted by it and must spend time alone to recharge their batteries. Dam-blocked people both loathe and wish for that very human contact.

The other type, the broken floodgate, is far more common. You will see them everywhere you go: They are the type that will try to assert their egoist dominance over everyone else. They are the fraternity members drinking at the bars, swearing to fight anyone that looks at them askance. They are the gang members that use intimidation to force others to do what they say. They are the people who feel the need to constantly put down any accomplishments others bring forward to show, because they are not their own accomplishments.

The real issue is that these people have no self-identity, because they are being overloaded with the egotist energy that comes from this chakra overflowing. They seek a group identity rather than a self, they constantly look to be above others because their ego is over-inflated, and they feel inadequate when others succeed while they do not.

The key to opening this chakra is in a deep, solitary meditation on what you, as a person, want from your own life. A perfect exercise for this is to get a device which will make a low sound every time a certain amount of seconds have passed. Electronic singing bowls, Japanese shishiodoshi bamboo fountains, or even a smartphone with a timer to play a sound clip will all work. Set the timer to a comfortable amount of time, around a minute or so.

Sit in lotus or half-lotus, or lie on your back, and close your eyes. When the first chime rings, our meditation begins: Imagine yourself in the center of a small circle, and from this circle extend a line to another circle with one of your immediate life goals inside of it. Do this for as many immediate goals you have, until the chime rings again. During the second period, evaluate each of those goals, and think about whether that goal is your own goal or the goal of an outside influence imposed upon you. Do you really want it, or does someone else want it for you?

Eliminate all the goals that you did not set for yourself, leaving the rest of the circles in an even space around you. The next time the chime sounds, imagine another row of circles attached to the immediate goals, being long-time goals. Repeat this process of evaluating them, and then finish with a circle of the goals of your entire life. Once you really consider what it is that YOU want, and not what you are trying to do either for or against others, you will be able to much more clearly see yourself as a single, defined entity, and not the tail-end of something else. You are everything, but you are also just you. Nobody else is you, and you are nobody but yourself. This is the paradox of the self, which is reflected in the solar plexus chakra.

Share
Previous What Is The Heart Chakra?
Next Anuradha Nakshatra