As one of the largest land mammals on Earth, the rhinoceros definitely makes a very strong physical presence. Although our natural train of thought would be to assume that such a mammoth creature would denote traits such as power, dominance, and authority, this is untrue with the rhinoceros.

In fact, the symbolic perceptions of rhinos are full of contradictions and surprising elements. For example, they are known to display aggressive behavior in the wild – most notably when threatened. But they are also quite passive and gentle beasts.

As they are becoming increasingly more likely to go extinct due to poachers, rhinos have seemed to form a strong bond with humans who make it their life’s work to protect and defend them. Generally, people would be afraid of being impaled by its large horn or trampled by its multi-ton body.

This, however, goes to show the duality of the rhinoceros spirit guide and also represents a key theme of this creature’s symbolic existence: things are not always as they seem.

Among others, the rhinoceros spiritual animal totem is thought to be a symbol of judgement, freedom, solitude, agility and movement, inner peace, and unconventionality. 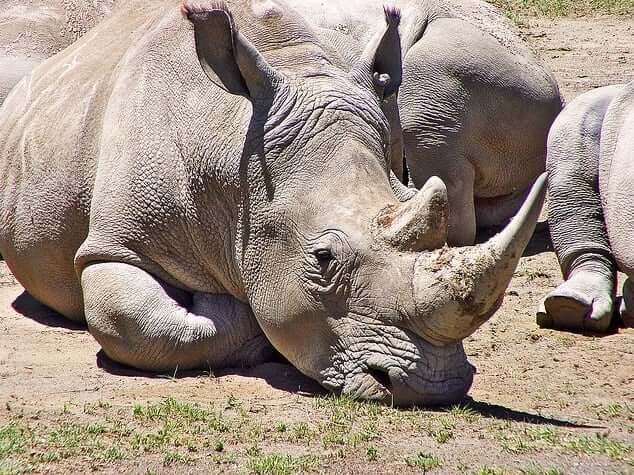 Because of its large size and weight, the rhino presses firmly into the ground. This is recognized as symbolic of the animal’s deep connection to the Earth, and it should remind us to stay in tune with the planet, as well.


Furthermore, the physical linkage of the rhinoceros symbolism and the ground serve other symbolic purposes, such as steadiness and sure-footedness. This animal is confident in its judgements and choices, and emboldens us to feel the same way about ourselves.

A rhinoceros spiritual totem comes stomping across your path with a loud and bold wake-up call. If it comes to you, it is advising you to look more closely at everything around you-things are not what they seem.

The rhinoceros symbol serves as a reminder to appreciate the bounty and abundance that you have in your life rather than focusing on what you may be lacking. Give thanks to all of the seemingly small miracles that exist around every corner of your life and never take them for granted. Who knows how long you will have to experience them?

Acknowledge actions and people every chance that you get and give credit where credit is due. This may be difficult for some individuals, as rhino people are for the most part solitary and spend a great deal of time alone. However, they are also known to be wise and need to exercise this wisdom with others.

People with the rhinoceros as their animal spirit can assist others in achieving success and learning how to live comfortably with themselves. They are also thought to be natural workaholics, though, and it is important to maintain the proper balance between the two.

When a rhinoceros symbol presents itself to you in a dream, it is suggesting that you should push forward toward your goals, calling upon your internal strength and resilience to achieve what you want. It is a creature of stamina, stealth, and explosive power, and these traits speak directly to us when we see the rhino.

Just as it can charge forward fearlessly with its horn, so too should we. In actuality, a rhino’s horn is not very strong, but it’s appearance combined with the animal’s confidence send other creatures running.

However uncomfortable it may make us, we must never take “no” for an answer. The rhinoceros animal totem teaches us to meet all obstacles head on and triumph over them, never permitting them to throw us off of our course. We can bulldoze over any hardship or difficulty that tries to prevent us from moving forward in the way that we desire.

Alternatively, an aggressive rhino meaning signals us to check ourselves, making sure that we are not getting carried away with our own ideas. While pushing forward with fervor is inspiring, steamrolling over everything else is a self-defeating and unproductive behavior.

Again, balance is the key, as with everything else in life. We must use our intellect and proper judgement to discern what is worth plowing through and what needs to be addressed and dealt with accordingly.

Share
Previous Are You Dating A Possessive Boyfriend?
Next God and Goddess Symbol Meanings- Fortuna