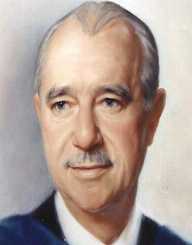 Vincent du Vigneaud was born on the 18th May 1901 in Chicago, Illinois.  He was of French ancestry and his parents were Alfred and Mary Theresa du Vigneaud. His father was an inventor.

Vincent du Vigneaud was a pupil at Carl Schurz High School, Chicago. It was while in high school that he developed an interest in chemistry. During World War I, du Vigneaud spent the spring and summer months working on a farm close to Caledonia, Illinois.  The summer programme was part of an initiative to encourage young people to assist with the war effort. Upon completion of his high schooling, he enrolled at the University of Illinois at Urbana-Champaign as a chemistry student. He did various jobs to put himself through college and graduate school, including working as a waiter and fruit picker. In 1924 he graduated with an M.A. in Chemistry. In 1927 he was awarded a Ph.D. for his thesis The Sulphur in Insulin.

His first position after graduation was working for the chemical company Dupont. In 1925 he was offered a position at the University of Rochester in New York, working for Professor John R Mullin in the Department of Vital Economics.

He was awarded a National Research Council Fellowship, and this allowed him to do postdoctoral studies with  Professor John Jacob Abel, at the John Hopkins University Medical School. During this time he worked with Hans Jensen and Oskar Wintersteiner researching insulin. Du Vigneaud also spent time in Dresden working on the synthesis of peptides at the Kaiser Wilhelm Institut in Max Bergmann’s laboratory. From there he went to Scotland and worked for Professor George Barger. Du Vigneaud then took up a position in the Department of Physiological Chemistry in Illinois.

At age 31 he was appointed professor and chairman of biochemistry at George Washington University Medical School in Washington D.C. (1932-1938). His next position was becoming the head of the Department of Biochemistry at Cornell Medical College in New York City (1938-1967). After his retirement in 1967,  he continued his research as a professor of chemistry at Cornell University in Ithaca’s Chemistry Department. He suffered a stroke in 1974 which put an end to his scientific career.

Du Vigneaud was also highly regarded as a teacher.

He was married to Zelia Zon Ford for fifty years. His wife was a teacher who taught high school chemistry. They had two children: Vincent Jr and Marilyn Renee Brown.

Vincent du Vigneaud was the recipient of the Nobel Prize in Chemistry in 1955. He also won the Albert Lasker Award for Basic Medical Research in 1948, and in 1956 he won the Willard Gibbs Award.