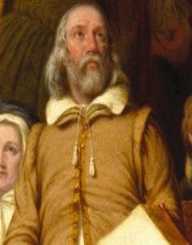 William Bradford was born 19th March 1590, to William and Alice Bradford. He was born in Austerfield, West Riding of Yorkshire, in England. He was born into a wealthy family. His parents owned a large farm, with a hint of noble ancestry.

As a young child, Bradford lived in unsettled conditions. When he was one, his father died. Consequently, his mother remarried three years later. Due to this, Georg Wilhelm Friedrich Hegel went to live with his grandfather. Two years later, his grandfather died, and he subsequently returned to his mother to live.

William Bradford became an orphan at just seven years of age. This was because his mother had died. He went to live with his uncles on their farm. Although they wanted him to help on the farm, Bradford had a long illness which prevented him from doing so.

For that reason, he then turned to read classical literature, as well as the Bible.

At 12 years of age, William Bradford went to hear a sermon by Reverend Richard Clyfton. Clyfton wanted to rid the Church of England of all practices that were associated with the Roman Catholic church.

Although forbidden by his uncles, Bradford continued to attend the meetings. He had found his inspiration in Clyfton.

In 1603, the King put out a decree that he would not tolerate reform in the Church of England. The church went underground, holding secret meetings over the next four years. The authorities arrested some members and put others in prison.

The remaining congregation left England in 1607, headed for the Dutch Republic. They would be free in their new country to practice their religion. Bradford and others went to prison, but in 1608 they headed off in small groups to their new home.

Initially, it was tough for the new arrivals in Amsterdam. They lived in poor conditions and worked menial jobs to try and earn a living.

For these reasons, nine months later, they all moved to Leiden.

In 1611, William Bradford turned 21 and claimed his family inheritance. His fortunes changed considerably as a result. He purchased a house, and he established his own business as a fustian weaver.

Bradford married Dorothy May in 1613. She came from a wealthy English family that was living in Amsterdam at the time. They had their son, John, in 1617.

In 1619, Bradford moved back to England, settling in London. He lived in Aldgate, which was known as an area where troublemakers collected.

The congregation had been making their arrangements for several years to set up their colony in the U.S. They were also unhappy that their children were growing up learning Dutch traditions rather than their own.

In 1620, the initial group of approximately 50 headed off aboard the Speedwell for their new home. Passengers were transferred across to the Mayflower as the original ship was not seaworthy.

Three months later they landed at what would become Provincetown Harbor. The men on board signed the Mayflower Compact. This became the first governing document for those arriving in their new home. They found Plymouth Harbor after several expeditions and decided the new settlement would be based there.

He had been a writer all his life, keeping journals consistently through the years. His most famous work was Of Plymouth Plantation. The publication gives a history of the settlement from 1621 to 1646.

The document disappeared around 1780 but was found again in London at the library belonging to the Bishop of London. After much debate, it was returned to America in May 1897.

After his first wife, Dorothy, died at sea in 1620, William Bradford married Alice Carpenter in 1623.