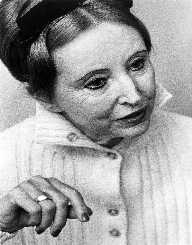 Anais Nin was born on February 21, 1903, in Neuilly-sur-Seine, France. She was of Cuban descent and became an American citizen where she rose to fame. She is known to have written many journals, essays, erotica and short stories. Some of her writings include ‘Delta of Venus,’ ‘A Café in Space’ and ‘Little Birds.’ Although she began writing at the tender age of 11 years, a more significant percentage of her works were published later after she died. Anais Nin died aged 73 on 14 January 1977 in Los Angeles, California.

Anais Nin was fully known as Angela Anais Juan Antolina Rosa Edelmira Nin y Culmell. She was born in France on 21 February 1903 to Joaquin Nin who was a famous artist and Rosa Culmell who was a talented singer. Nin spent her childhood years in Spain before her parents divorced and she was taken to New York by her mother. Her two brothers also accompanied them to live in America.

Anais Nin attended school until the age of 16 when she dropped out of school and ventured into dancing and modeling. She also learnt how to speak English while in the United States and also used French frequently.

While in America, Anais Nin met Hugh Parker Guiler and got married to him on 3 March 1923 in Cuba. The couple went to Paris where Anais Nin began writing and trained to become a dancer while her husband pursued his banking profession. Her first book was known as ‘D.H. Lawrence: An Unprofessional Study’ which was in print in1932. She also took lessons on psychotherapy under the tutorship of Otto Rank. Nin left France for New York together with her husband Hugh Guiler in 1939.

Some of the works Anais Nin had produced included diaries in which she wrote her affairs and personal issues. In her volume 1 diary 1931-1934, she talks about her relationship with Henry Miller. However, her husband Hugh was reluctant about being mentioned in her chronicles. Sometime later, Nin began another relationship with Rupert Pole in 1947 whom she met in Manhattan. Their relationship ended in marriage on March 17, 1955, and remained a secret for a long time. Afterwards, Anais Nin and Pole relocated to California without Guiler’s knowledge, and her marriage to Pole was hidden until she died in 1977.

Anais Nin wrote ‘Henry and June’ in 1931-1932 which were extracted from one of her diaries and was printed out in 1986 as a full book. In this book, she explains her love cycle which revolved around people like Hugh and June, Miller’s wife. In the same book, she also disapproves of the perception that people had about her being a bisexual.

Anais Nin's second book was ‘House of Incest’ published in 1936 contained fictitious stories. She also expressed how imagination can sometimes entrap someone and the struggle it breeds to break free. Nin also appeared in several films including ‘Ritual in Transfigured Time, (1946), ‘Bells of Atlantis’ (1952) and ‘Inauguration of the Pleasure Dome’ (1954).

Anais Nin worked as a lecturer in many universities and gave up her political aptitude. She received honors of a doctorate from the Philadelphia College of Art in 1973. Nin was also a member of the United States National Institute of Arts and Letters.

Anais Nin had been struggling with cancer for three years, and she died at her home on 14 January 1977.