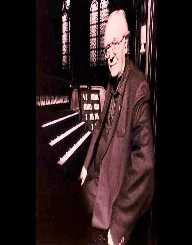 Olivier  Messiaen was born 10th December 1908, to Pierre and Cecile Messiaen. He was born in Avignon, France, with one younger sibling. His father was an English teacher, who also translated the works of Shakespeare into French. His mother was a poet. Messiaen was born into a literary family.

When World War I broke out, Olivier  Messiaen’s father was conscripted to fight. Olivier  Messiaen ’s mother took the two boys to their uncle’s place in Grenoble to stay for the duration. Olivier Messiaen would often give Shakespearean performances for his brother, using a makeshift theater.

Olivier Messiaen started taking piano lessons and also began composing his own music. His father returned from war in 1918, and the family moved to Nantes. Olivier  Messiaen’s piano lessons continued. A year later, the family moved again, this time to Paris, where Olivier  Messiaen’s father had secured a teaching position. In 1919, Olivier Messiaen joined the Paris Conservatoire.

Over the next few years, Olivier Messiaen made great progress, winning several awards. This culminated in 1930, with him winning first prize in composition.

In 1937, Olivier Messiaen was commissioned to compose a piece of music to accompany a light and water show on the Seine, during the Paris Exposition. Once the commission was completed, Olivier  Messiaen continued to compose, completing various pieces.

Olivier  Messiaen was required to join the French army when World War II began. As he didn’t have good eyesight, he wasn’t sent to active combat duty but was assigned to the medical auxiliary. In May 1940, he was captured and imprisoned at Stalag VIII-A. He soon met other musicians amongst his prison inmates and composed a piece for them, which they all performed in 1941 for the other prisoners and guards.

Olivier Messiaen was released from prison in May 1941. He was appointed as Professor of Harmony at the Paris Conservatoire. He taught at the Conservatoire until he retired in 1978.

Once again, Olivier  Messiaen was commissioned at different times to write specific pieces of music. This included, in 1971, to compose a piece for the Paris Opera. Although reluctant, he began to work on the commission in 1975. It took him until 1979 to complete it, and then until 1983 to orchestrate it and have it performed for the first time.

From 1928 onwards, Olivier Messiaen had 53 published compositions, including Catalogue d’oiseaux (Bird Catalogue) which was 13 parts over seven volumes. He also had 13 compositions that were unpublished or published posthumously.

Among his many awards and honors, are the following:

Olivier  Messiaen married Claire Delbos, a violinist, and fellow composer, in 1932. The couple had a son, Pascal, born in 1937.  Sadly, Delbos had complications due to an operation and spent the rest of her life in an institution for the mentally impaired. She died in 1959.

In 1961, Olivier Messiaen married Yvonne Loriod, a pianist. The two became frequent travelers. Olivier Messiaen continued his studies on transcribing the songs of exotic birds, and Loriod assisted him. They traveled until Olivier  Messiaen 's death in 1992.

As an organist and a composer, Olivier Messiaen has been recognized as one of the major composers of the 20th century.