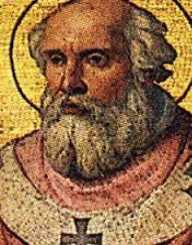 Pope Leo IX served as the 151st Pope of the Catholic Church from 12th February 1049 to 1054. A feast day, 19th April has been set aside to celebrate the pope for being a saint.

Pope Leo IX was born as Bruno of Egisheim-Dagsburg on 21st June 1002 to an aristocratic family. His father was closely related to Emperor Conrad II.

His family sent him to Toul where he schooled with other boys of noble birth. In school, he excelled. At the age of 25, he was canonized before being consecrated as Bishop in 1026 at the age of 25.

After the death of Pope Damasus II, the house of warms selected Bruno as his successor. Despite the decision’s concurrence by the Roman delegates, Bruno preferred a canonical election to choose the pope.

After assuming the pope status, he led the Easter committee in 1049. In the way of reforming the Catholic, Church Pope Leo IX preferred the traditional methods.

Some of the evil acts he proposed himself include clerical, lay investiture and simony. He made countless trips around Europe that earned him the name ‘The Pilgrim Pope.’

In 1053, Leo IX led the military against the Normans who invaded the Italian region. After losing the battle, he was captured in June 1053. The pope remained in captive for nine months in Benevento, Italy.

Pope Leo IX died on 19th April 1054, shortly after his return from captivity. The Catholic Church declared him a saint and 19th April is celebrated annually.