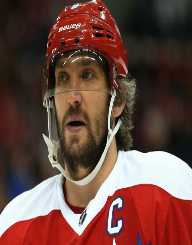 Hockey player Alex Ovechkin was born on the 17 September 1985 in Moscow, Russia to Mikhail and Tatyana Ovechkin. His father was a soccer enthusiast, and player and his mother was an Olympian having won two gold medals in basketball. Ovechkin became interested in hockey at a young age. When he was ten, his older brother Sergei died as a result of injuries received in a motor accident.

Alex Ovechkin's professional career began with Dynamo Moscow (2001-2002). Two years later he won an award for the best left-wing in the league. And in 2003, he was selected to play in the Russian team for the World Junior Hockey Championship.

Washington Capitals selected Alex Ovechkin first overall in the 2004 NHL Draft, and he made his debut in the 2005-2006 season. With 52 goals and 54 assists for the season, he was awarded Rookie of the Year and won the Calder Memorial Trophy.  He was also selected for the NHL: First All-Star team. He had another excellent season in 2006-2007 with 46 goals, 92 points and was again chosen for the First All-Star team.

In the 2007-2008 season, he scored 65 goals and 112 points. At the time, the last player to have achieved  60 goals in a season had been in 1996. At the end of the 2007-2008 season, Ovechkin took home the Hart Memorial Trophy. He also won the Lester B. Pearson Award for the most outstanding player, the Art Ross Trophy for the leading point-getter and the Maurice Rocket Richard Trophy for the league’s top goal-scorer. His contract was renewed to a thirteen year, $124 million deal. He was also presented with the key to Washington D.C. by the mayor Adrian Fenty.

Washington Capitals won the division crown in the 2008-2009 season with Ovechkin scoring 56 goals. Alex Ovechkin won both the Hart Trophy and the Pearson trophy that season. Then in early 2009, he became the 4th player to score his 200th goal in four seasons. He was made the captain of the Washington Capitals in January 2010 and reached a 500-point milestone by becoming the fifth player to achieve that mark in five seasons.

In January 2016, Alex Ovechkin became the 43rd player in NHL to have reached a career milestone of 500 goals. He scored his 500th goal while playing in his 800th game in the NHL against the New York Rangers. He won the Pearson Award and was also in the First All-Star Team for the 5th time. During 2012 and 2016 he continued leading the league in goals.

During 2016-2017, Ovechkin scored 49 goals. His team won their first conference title in two decades, and he participated in the Stanley Cup finals. He became the first Washington Capitals player to achieve the 1000th game mark in April 2018. In mid-2018, Ovechkin took the NHL trophy to a fan zone in Moscow where World Cup games were being screened, the Russian National Guard. In Moscow, Alex Ovechkin posed with the cup while fans took photographs of the trophy.

Alex Ovechkin represented Russia at the Winter Olympics in 2006, 2010 and 2014 and eleven World Championships.

In 2018, Alex Ovechkin won the ESPY Award for the Best Male Athlete.

Alex Ovechkin is married to Nastya Shubskaya, and the couple has a son, Sergei. His wealth is in the region of US$60 million.