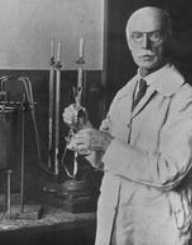 Frederick Gowland Hopkins was born on June 20th, in 1861. He was a celebrated English biochemist. In 1929, Hopkins was bestowed with the Nobel Prize in Physiology or Medicine. He shared this award with Christiaan Eijkman. Together, the two had engaged in research that led to the discovery of vitamins. Hopkins was also credited with the discovery of tryptophan, an amino acid in 1901. For a period of five years beginning 1930, he was the President of the Royal Society.

Frederick Gowland Hopkins was born on June 20th, 1861. His birthplace was in Eastbourne, Sussex. He schooled at the City of London School. Later on, he went for his further studies at the University of London External Programme. At some point, he enrolled in a medical school called Guy's Hospital. Later in life, Hopkins took the job as a teacher at Guy's Hospital where he taught toxicology and physiology for four years.

While teaching at Guy's Hospital, Frederick Gowland Hopkins also made his first publication on blood albumins. His interests in the science field were quickly noticed, and in 1898, Sir Michael Foster invited him to carry out intensive research on physiology at the Cambridge University. Hopkins was mainly assigned to investigate more in-depth into the chemical aspects of physiology.

In mid-1902, Frederick Gowland Hopkins obtained his doctorate from the University of London. Similarly, he was granted readership in biochemistry around this time from the Trinity College. Before his research into physiology, biochemistry was at this time not recognized as a different branch of science. Nonetheless, with Hopkins contributions in the field, in 1914, he was appointed the chairman of biochemistry at the University of Cambridge. This made him the first biochemistry professor at the university.

In 1912, Frederick Gowland Hopkins released a publication that later earned him high acclaim. In this publication, he demonstrated the right animal feeding diets that would boost their growth. During this time, he proposed that there were absolute essentials for animal growth and gave them the term "accessory food factors." These were later identified as ‘Vitamins.’ This work led to the Nobel Prize in Physiology for Medicine that he was given in 1929 alongside Christiaan Eijkman.

Frederick Gowland Hopkins' research on vitamins proved handy during World War I. When there were food shortages his ideologies of essential food nutrients were quite crucial.

Frederick Gowland Hopkins wedded Jessie Anne Stevens in 1898. The two were blessed with two daughters. Sadly, his wife passed away in 1937.

Hopkins died a decade later after his wife had passed away. He died on May 16th, 1947. He was 85 years at the time of his death.