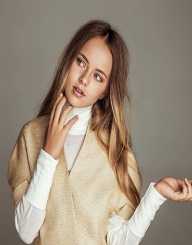 The time has changed from when supermodels are referred to as glam dolls like Tyra Banks and Cindy Crawford. It is now a time when a young child of 4 or 5 years can enter a fashion industry to exhibit glamour as well as the ability to showcase their skills as a great model. Kristina Pimenova is no doubt one of the best and most successful supermodels of this generation. She was just 11 years old when she had taken over the media like a storm. She is flawless with a great sight to behold.

She was also known as a very gorgeous and interesting young lady who knew more about the fashion world even at age 8. Kristina Pimenova is so much admired and have a lot of fans on social media. It seems this is the right path for her as many well-wishers are hoping that she win many laurels in her journey in the showbiz.

Kristina Pimenova was born to a mum who was once a model and received the beautiful genes from her mother. She could be said to have had the help of her mother in her race in the lucrative model industry. She is known to have been in the ambiance of fame ever since she was 4. This was the time her mother brought her in a professional photoshoot crew to help her in getting over the camera fear. It was this pic that her mother sent to President kids, a  famous modeling agency with several modeling contracts and commercials.

She started working with major commercials as well as an advertisement at a very young age of 9. It was her natural beauty that caught the attention of many leading brands as well as designers all over.

Kristina Pimenova has tasted a lot of success at a very young age with her fashion show feature and her feature on Vogue’s covers, one of the leading magazine. She has gone far in achieving many things that people of her age only dreamt of having. She even went ahead to become one of the top models of her time. It seems she knows her game and not ready to stop it now or ever.

Kristina Pimenova also signed contracts with different bands including Roberto Cavalli, Benetton, and Dolce & Gabbana among others. She has proved the fact that success is no respecter of age. Her work with President Kids started after her mother sent her pic to them and she is currently associated with La Models, the youth section most especially. Currently, she is being followed by over four million fans on her Instagram and Facebook as well as other social media platforms. Her success and fame are no doubt one of the success stories that are worthy of being praised.


WHAT MAKES HER DIFFERENT FROM OTHERS?

Kristina Pimenova’s name would probably pop up when you search for The Most beautiful girl in the 21st Century. Her personality has not been affected by the success she had at a very young age. She does not even lose touch with reality, and her mother always tracks her social life. Kristina Pimenova does this in order not to make her lose the joy of her childhood as well as her way. Kristina is a humble and cheerful child that is always ready to meet people as well as try new things out. She is also always ready to impress the world with her style during the photo session.

Kristina Pimenova has not been spared by critics who have chosen to find fault with this little girl despite her gorgeous blue eyes as well as her blonde hair. She is always hailed as one of the most beautiful girls, although she has her shortcomings. Although, many have made negative comments about him as well as a controversial note about how she behaves. She still keeps climbing the ladder of success because she is always moved by people’s trivial talk.

Kristina Pimenova was born on December 27th, 2005 to Glikeriya Shirokova and Ruslan Pimenov in Moscow, Russia. Her mother was a former model while her dad was formerly a football player. Although she was born in Moscow, she had to move to Los Angeles because of her modeling career. She loves training for gymnastics or spending time with her parents when she is not working on photoshoots or runway projects.