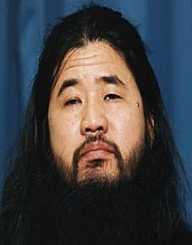 Shoko Asahara was a Japanese criminal and cult leader.

Chizuo Matsumoto was born in the city of Yatsushiro, Japan, on March 2, 1955. He was born in a poor family. He had eight siblings and his parents worked as straw mat makers. He was born with infantile glaucoma, so he was fully blind in his left eye and partially blind in his right eye. Because of that, he went to a boarding school for the blind. During his time there, he physically abused his classmates and took their money. After his graduation, he started working with traditional Chinese medicine and acupuncture. In 1978, he married a woman named Tomoko and went on to have six children with her. In 1981, he was arrested for selling illegal drugs from his unlicensed pharmacy.

Chizuo Matsumoto soon decided to change his name to Shoko Asahara. He became very interested in astrology and in different religions, such as Buddhism, Taoism, and Christianity. In 1984, he formed a meditation group called Aum Shinsen no Kai. Three years later, he renamed it to Aum Shinrikyo. The group expanded quickly. In 1989, the authorities in Tokyo recognized it as a religious corporation.

Asahara started appearing in magazines, on TV, and at universities. He gained a large amount of followers. He based the philosophy of his group mainly on the teachings of Buddhism and Christianity. He created conspiracies against other religious groups. He talked about doomsday and World War Three. He told his followers he could take upon their sins and give them spiritual powers. He wrote a few books, including Declaring Myself the Christ.

Asahara’s followers started committing crimes under his influence. On November 4, 1989, they murdered a lawyer named Tsutsumi Sakamoto, along with his family. On June 27, 1994, they released the nerve gas sarin from a truck, killing eight people. The attacks culminated with the Tokyo attack on March 20, 1995. They released sarin in the subway, killing a dozen people and harming thousands.

Asahara went into hiding, but he was found by the police on May 16, 1995. He was accused of murdering 27 people. His trial lasted more than seven years. He was found guilty on most of the charges and sentenced to death by hanging. His lawyers and his family created several appeals, but all of them were declined by the court. He was executed at the Tokyo Detention House on July 6, 2018.