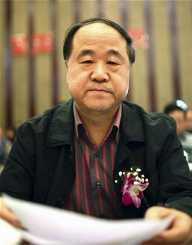 Mo Yan was born on February 17, 1955. He is a Chinese novelist and short story writer. He is famous for his epic novel ‘Red Sorghum.’ Most of his books have been adapted into movies worldwide.

Mo Yan was born as Guan Moye on February 17, 1955, in Gaomi, China. He was born into a low-income family that practised farming for a living. He dropped out of school in fifth grade during the Cultural Revolution. He practiced farming for all the time that he had dropped out of school. In 1973, he began working in a cotton factory. In 1976, he became a member of the People’s Liberation Army. In 1981, he started writing short stories. He adopted the pen name ‘Mo Yan.’ The name Mo Yan means Do Not Speak.

Mo Yan began studying literature at the PLA Academy of Art until 1986. During his time in the Academy, he published short stories such as ‘Explosions’ and ‘Transparent Red Radish.’ In 1987, he published the stories ‘Red Sorghum’ and four other stories in ‘Red Sorghum Family.’ He wrote about genres such as satire, realism, love, and tales about humanism. In 1989, he published two novels, ‘The Garlic Ballads’ and ‘Thirteen Steps.’ In 1992, he published a collection of poems titled ‘The Republic of Wine.’ In 1994, he published ‘The Herbivorous Family.’ The following year he published the novel ‘Collected Works of Mo Yan.’

In 1995, Mo Yan published the novel ‘Big Breasts and Wilde Hips’ which was withdrawn from publication due to the sexual content it contained. In 1997, he left his position in PLA and went to work as a newspaper editor. He continued writing fiction stories using his rural hometown. In 2004, he published his novel ‘Tanxiangxing.’ In 2013, the novel was translated into ‘Sandalwood Death.’  He later worked on works such as ‘Shifu You’ll Do Anything for a Laugh’ which was adapted into the film ‘Happy Times.’ The film went ahead to win the Fipresci Prize. The film also won the Silver Spike at the Valladolid International Film Festival held in 2000.

In 2006, his book ‘Shengsi Pilao’ as translated into English as ‘Life and Death was Wearing Me Out.’ In 2009, Mo Yan published his novel ‘Frog’ which discusses the outcome of China’s imposition of a single child policy. In 2003, his short story ‘The White Dog and The Swing’ was adopted into the movie ‘Nuan.’ In 2004, the film ended up winning the Grand Prix at the sixteenth Tokyo International Film Festival.