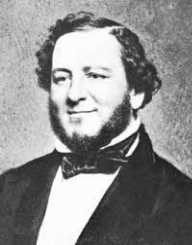 Lawyer turned politician Judah Philip Benjamin was born on August 11, 1811. His birthplace was the island of St. Croix, Danish West Indies (now the Virgin Islands). His Sephardic Jewish parents, Philip Benjamin and Rebecca de Mendes Benjamin moved to the island. At that time, the Britishers ruled the island. They were British nationals and were based in London before moving to the West Indian Island.

The Benjamin family again moved to the United States in 1813. In those days, Jews were well treated in the U.S. and were allowed to prosper. The family later settled in Charleston, South Carolina. The junior Benjamin attended the Fayetteville Academy, Fayetteville, North Carolina.

In 1825, Judah Benjamin enrolled at Yale University to study law. Unfortunately, the University expelled him in an unsubstantiated charge of theft. Thus, he had to leave the university without graduating. According to some historians, anti-Semitism might be the root cause of his expulsion, although Benjamin was not a practicing, devout Jew. Upon his removal, Benjamin moved to New Orleans, Louisiana.

He studied law there while simultaneously working as a clerk in a commercial house. Besides, he taught English lessons to the French Creole Aristocracy to make a decent living. In 1832, he was admitted to the Louisiana Bar. Soon, he became a successful legal professional specializing in the practice of insurance and commercial law.

Judah Benjamin gradually concentrated on other ventures after having established himself as a hugely successful lawyer. He briefly engaged himself in the business of sugar plantation and prospered in it as well. As a wealthy planter, he also owned several slaves.

He plunged into politics after lending a helping hand in organizing the Illinois Central Railroad. In 1842, his election to the lower house of the Louisiana Legislature as the Whig candidate kick-started his political career.

Judah Benjamin became a member of the Louisiana Constitutional Convention in 1844 after the end of his tenure in the Louisiana legislature and served there until 1845. In 1852, he was elected to the U.S. Senate. A vocal supporter of slavery he minced no words in expressing his pro-slavery views while delivering his speeches in the U.S. Senate.

Judah Benjamin's wife Natalie was a wealthy extravagant lady from the affluent French Creole family. She was notorious for her scandalous conduct in the New Orleans society. Their marriage in early 1833 was a result of the desperation of the Creole family to get rid of their daughter and Benjamin’s highly ambitious pursuit to quickly rise to the top of the dominant society.

However, his wife vehemently opposed his involvement in politics. She did not approve of his frequent absence from the family due to his political ambitions.

In 1845, eleven years after their marriage, Natalia chose to live away from Benjamin. Accordingly, she moved to Paris with their only child in her custody. In the absence of his wife, Benjamin went back to his plantation.

Judah Benjamin did experiments with sugar chemistry and processing during the period spanning 1845 to 1848. However, one of his friends failed to honor a promissory note signed by him. Hence, he had to forfeit the plantation owned by him.

Resumption of Political Career And The American Civil War

Judah Benjamin came back to pursue his political career with renewed vigor after losing the plantation. In 1853, he was elected to the U.S. Senate on a Whig party ticket defeating his rival candidate Democrat Solomon W. Downs. After that, he switched his allegiance from Whigs to the southern Democrats. He was then re-elected to the senate in 1856 from the conservative southern Democrat party ticket. He served the post of Senator until 1860. In the wake of the event of Louisiana voting to leave the union, Benjamin resigned from the position of Senator.

The Confederacy suffered significant military setbacks, loss of human resources, shortage of equipment, and heavy casualties. Finding the going tough, he resigned. However, his friend and Confederacy President Jefferson Davis again came to his rescue. He appointed Benjamin as the Secretary of State.

In 1865, the American Civil War ended. Upon the conclusion of the civil war, the federal agents hounded him. Hence, Judah Benjamin had to flee. He spent a grueling and vulnerable five months on the road trying to evade capture by the federal agents.

After that, Judah Benjamin somehow reached England on August 30, 1865. Upon his arrival, he attended Lincoln’s Inn, London, to study law. In 1866, he entered the British Bar and began practicing law in London. He also contributed to the local newspapers and magazines by writing about business and corporate law. In 1872, he received the appointment of Queen’s Counsel.

As said earlier, Judah Benjamin's personal life was in turmoil due to his extravagant and scandalous wife. They lived separately since the 1840s after the birth of their only child. Benjamin once tried to reunite the family during the late 1850s when he was serving as a Senator. However, his wife again left him soon afterwards. On May 6, 1884, he died in Paris. He was entombed at the Pere Lachaise Cemetery.

Among his several write-ups, a law book titled ‘A Treatise on the Law of Sale of Personal Property’ (1868) remained the principal law textbook in England and the United States for many years.