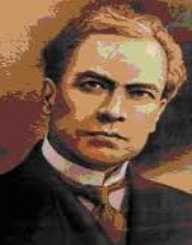 Ruben Dario was a very popular poet and journalist during his time. He was born in Nicaragua on January 18, 1867, and died on February 6, 1916. He started writing at the age of twelve and was called the ‘child poet’ at that time. He began the Spanish American movement called the Modernismo, in literature. His artistic works usually symbolized an ideal world that would restore peace and unity.

He was a great influence on Spanish American literature. In his later years, he became concerned with the American imperialism on Spain after the Spanish- to speak about his views on it.

Ruben Dario was born in Metapa, Nicaragua. His names are Felix Ruben Garcia Sarmiento. Dario is his pen name adopted from one of his great-grandfathers, which he began to use when he was 14 years. He was born by Manuel Garcia, a merchant, and Rosa Sarmiento, who later divorced, forcing Dario to be raised by his aunt and uncle in Leon.

Ruben Dario started in 1882 as a teacher in El Salvador. There he was introduced to Francisco Gavidia, a French literature expert who was a great influence on Dario’s writing. He left El Salvador for Nicaragua in 1883, and got a job at the ‘National Library.’ He moved to Chile in 1886 and made new friends who helped him get a job in the Argentinian newspaper ‘La Nacion’ as a correspondent.

He published his first book“Azul” in 1888; the book is a collection of short stories, with a mixture of poetry and prose. This was his first attempt to mix Spanish and the stylistic movement.

Ruben Dario traveled to Guatemala, and then to Spain as a Nicaraguan delegate to celebrate Spain’s discovery of America. This trip exposed him to a lot of countries. He took up an appointment as Colombia Consul at Buenos Aires in Argentina, in 1893. He claimed the atmosphere was stimulating for his writing. He was sent to Spain in 1898 as a correspondent for ‘La Nacion’ to report on the conditions of Spain after the Spanish-American war. He returned to Buenos Aires and was sent to Paris by ‘La Nacion.’

He published two of his most important books, ‘Los Raros’ and ‘Prosas Profanas Y Otros Poemas.’ They are about writers who influenced him and the importance of Modernist movement for Spanish literature respectively. His works in Paris is recorded and compiled into a book called ‘Peregrinaciones.’

Ruben Dario was full of potential as a kid. He published his first poem when he was thirteen. He made a name for himself as a kid, and this gave a very strong boost to his career.

His greatest work is the book called “Cantos de Vida Y Esperanza”; meaning “songs of life and hope.” This is regarded as his masterpiece, depicting his concerns and hopes for Spain’s future.

He later left Rosario, traveling Latin America and Spain. Although he was still married legally to Rosario, he met Francisca Sanchez del Pozo in Madrid, in 1899. She became his companion and bore him two children, a girl, and a boy. The girl died of smallpox after her birth, and the boy was born in 1903. He was a great writer, but a bad alcoholic. He struggled with alcoholism, and it was a menace to his health.

Ruben Dario spent his last years writing about his concerns over North America’s imperialism after they defeated Spain in the Spanish-American war. He traveled across Europe and North America to speak on his views over the situation of Spain after the war.

He was an alcoholic. Ruben Dario had complications from pneumonia, which contributed to the loss of his life. He died on February 6, 1916.