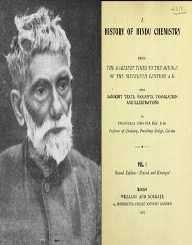 Prafulla Chandra Ray was born on the 2 August 1861 in Raruli-Katipara in the District of Khulna which is today part of Bangladesh. His father was Harish Chandra Ray.

Prafulla Chandra Ray studied at the village school and then was sent to Kolkata where he was at student at Hare School and the Metropolitan College. Although primarily interested in studying literature, he attended lectures given by Alexander Pedler, and this drew him to chemistry.

In his spare time, he taught himself French and Latin.

Once he had completed his studies and obtained his degrees, Prafulla Chandra Ray returned home to India. He spent a year working in Jagadish Chandra Bose’s laboratory. In 1880, he was appointed Assistant Professor of Chemistry at Presidency College, Kolkata.

Prafulla Chandra Ray was researching and publishing about mercurous nitrite, and these papers brought him international attention. Besides his research, Ray was a gifted teacher and active in encouraging young students to become chemists. Two of his star pupils were Meghnad Saha and Shanti Swarup Bhatnagar.

Prafulla Chandra Ray was in favor of India becoming more industrialized, and he set up the first chemical factory in the country. By 1901, his chemical factory was known as the Bengal Chemical and Pharmaceutical Works Limited.

Apart from his autobiography, Prafulla Chandra Ray was a prolific writer and published many scientific papers and articles. He wrote A History of Hindu Chemistry from the Earliest Times to the Middle of Sixteenth Century

Prafulla Chandra Ray was the recipient of many honors and awards including becoming an honorary fellow of The Chemical Society and German Academy, Munich. He received a knighthood in 1917. He was president of the Indian Science Congress (1920) and The Royal Society of Chemistry awarded him the first Chemical Landmark Plaque to go a non-citizen of Europe.

The Royal Society of Chemistry (RSC) honoured his life and worked with the first ever Chemical Landmark Plaque outside Europe. The University of Calcutta made him an honorary Doctor of Philosophy (1908) and Durham University awarded him a doctorate in 1912.

In 1901, after Gandhi had returned from South Africa, the two men met and were mutually impressed with one another.

After the massive flooding in north Bengal in 1923, Prafulla Chandra Ray was responsible for collection over 2.5 million rupees as part of the Bengal Relief Committee which he had organized. He was involved with and contributed funds to the Sadharan Brahmo Samaj. He also gave money to the Brahmo Girls School and the Indian Chemical Society. To encourage the study of chemistry in India, he set up the Nagarjuna Prize for the most outstanding student in chemistry and the Ashutosh Mukherjee Award open to students of botany or zoology.

In 1916 Prafulla Chandra Ray was appointed Professor of Chemistry at the University Science College. When he turned 60, in 1921, he donated all of his future earnings to the development of the chemistry department at the University; this included two research fellowships.

His autobiography was published in two sections, Life, and Experience of a Bengali Chemist (1932) and (1935). He dedicated both books to the youth of India.

Prafulla Chandra Ray retired at the age of 75. As both an industrialist and a scientist, he is considered by many as the father of the pharmaceutical industry in India. He also, despite his brilliance and success, remained a kind, generous man who lived a very simple lifestyle.

Prafulla Chandra Ray died on the 16 June 1944. He was eighty-three years old.