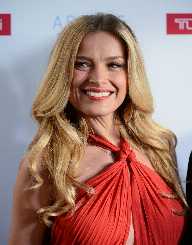 Petra Nemcova was born on June 24, 1979, in Karvina, Czech Republic. She has a sister Olga, which she is very close to. When Nemcova was a teenager, she was discovered by NEXT Model Management, when she was walking in Prague. She was signed immediately and modeled in Milan. The glamorous modeling life was too overwhelming for her at first, so Nemcova moved back to her home country. However, when she was 16, Nemcova won the Chez Elite Model Look competition and decided to turn to modeling professionally.

After the contests, Nemcova signed a modeling contract and went to Milan. She modeled for Benneton, Bulgari, Intimissi, Max Factor and many others. After her initial success, Nemcova appeared on covers of Shape, Cosmopolitan, Glamour, and FHM. She became world-recognized after appearing on the Sports Illustrated cover.
Nemcova gained attention outside the fashion industry in 2003. She appeared on the Sports Illustrated Swimsuit Issue from a shoot in Barbados. She also appeared in the 2004, 2005 and 2006 issues. After this, Nemcova started working with Victoria’s Secret, Glamour, and Elle.

Nemcova’s first TV appearance was in the 2001 British TV series Absolutely Fabulous. In 2004, Nemcova was on the panel of judges on the 53rd annual Miss Universe competition that took place in Quito, Ecuador.

After her early work on TV, Nemcova was the host on TLC’s show A Model Life in 2007. The series followed six young models from different countries and their quest to earn a modeling contract with NEXT Models. The same year she was also the presenter at the Live Earth convention that focuses on the environment. She was also one of the contestant’s on Dancing With The Stars but placed 8th with her partner Dmitri Chaplin.

Besides her modeling and TV work, Petra Nemcova has also tried out her talent in writing. In 2005, she released her autobiography “Love Always, Petra.” The book is focused on her childhood in Czechoslovakia under the Communist regime and the beginning of her career.

In 2008, Nemcova tried out real estate business by selling two apartments in New York City for around 25 million dollars.

On December 26, 2004, while on vacation in Khao Lak, Thailand, the Indian Ocean earthquake took place with a subsequent tsunami. Nemcova was together with her then-fiancé Simon Atlee. When the tsunami wave struck, the couple were swept out of their hotel room window. Atlee drowned, but Nemcova suffered from serious internal injuries and a broken pelvis. She managed to hold on to a palm tree for eight hours until Thai civilians rescued her and she was airlifted to a nearby hospital. This event inspired her to found the Happy Heart Foundation in 2006. The foundation works to help children recover from natural disasters and rebuild schools. She was also awarded Glamour Survivor Award in 2005 in gratitude for her work after the tsunami. In 2012, Nemcova was awarded the James Hammerstein Award for her support of children in need. She was also named the Ambassador-at-large in Haiti after the tragic earthquake for the Happy Hearts Fund.

Petra Nemcova lost her first fiancée in the tragic Tsunami in 2004. It has been rumored that she also dated Sean Penn and James Blunt. In 2012, Nemcova got engaged with actor Jamie Belman, but she broke off the engagement. Since 2014, she is in a relationship with Laurent Lamothe, the prime minister of Haiti.

As of 2015, Nemcova’s net worth is estimated to be around $ 9 million. This includes her earnings from modeling and TV host work.