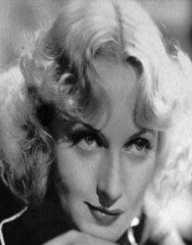 Carole Lombard was a native of Fort Wayne in the state of Indiana. She was born on the 6th day of October in the year 1908. When she was 13 years old, she got her first role in the movie; A Perfect Crime.

She dropped out of school by 1924, to begin a career in adventure films and a couple of westerns that were low-budget. She was earning a weekly wage of $75. She was a social magnet on set and enjoyed the photo shoots.  She loved the costume on set and did not like the roles she was getting at this early stage of her career.

Carole Lombard got a role in the Fox feature “Gold Heels” in 1924 although she also made two appearances in movies with no credits at about the same time. Her limelight entry was with the movie “Marriage in Transit” in 1924 and in March. This Grace Lutz directed –movie gave her some excellent reviews.

She was again on set in “Hearts and Spurs” and the “Durand of the Bad Lands” movies. These were both released in 1925, and this was the same year that she got involved in a scarring accident. She lost her contract with Fox after she got a scar on her face from this car mishap.

She had to undergo a facial surgery to hide the scar, and despite this, she needed more makeup to hide the scar always. This eventually made her less of a feature on the movie scene with fewer contracts coming her way.

She caught the eye of Pathe Exchange who was Sennett film marketer and he offered her more demanding and worthwhile roles. She showed up on the set of “Show Folks” as well as “McCobb's Daughter” in the following year. These films gave her better reviews and projected her more.

Fox gave Carole Lombard a chance at an encore by 1928, when she played Blonde Rosie in the film “Me, Gangster.” The success of this movie was an excellent elixir for her as she basked in the euphoria and commercial gains.

The torpedo of the old order in the film industry was to mean well for Carole as the transition to the spark and sheen of modern Hollywood appeared. Her husky voice was an attraction, and as seductiveness became a big plus in the new face of film-making, she scored big.

Her full-length role in “High Voltage,” which was released in the year 1929, was the beginning of immense success for her. Along with “The Racketeers” and “Big News,” she hit critical acclaim that showed that she had the stuff that the market needed.

Fox welcomed Carole Lombard with open arms in 1930 in the film, “The Arizona Kid” and her performance was again a splendid one. This led her to a Paramount Pictures weekly contract of $350 pay. She hit the $3500 weekly bar by 1936, and she had a soaring reputation by this time. Her roles at Paramount were the 1930 sizzlers “Fast and Loose” and “Safety in Numbers.” A misspelling of her name with an ‘e’ at the end of Carol was what gave rise to the new Carole Lombard, and she loved it just like that.

Carole Lombard had the tag of the Hollywood’s priciest actress by 1937, with her annual count getting to $450,000. She opened the year with the film “Swing High, Swing Low” with the films “True Confession" as well as “Nothing Sacred” coming right along. These all gave her more applause and huge acclaim.

She went solo by 1939 when she ended her contract with Paramount Pictures. She did an Indie that year “Fools for Scandal.” She also came out with “In Name Only “and “Made for Each Other” in the same year. She got $150,000 for the former, and it was worth it.

Carole Lombard took on roles in comedies since it was her turf after three years away.  She was credited for roles in the 1941 feature “Mr. & Mrs. Smith.” In 1942, she was seen again in the movie, “To Be or Not to Be.” There is no doubt that these were the last significant films.

The boom of the war years led Carole Lombard to sell rave War Bonds in 1941. She was on the trip with her press assistant called Otto Winker. Her mother was also a part of the trip; she was reputed to have sold 2 million dollars in war bonds. She, unfortunately, died on her way back from this trip on a plane crash.

Posthumously, she was in 1999 ranked number 23 on the list of 25 American female screen legends in Hollywood by the American Film Institute.

Carole Lombard's first marriage was in 1931 to William Powell, and she divorced after two years of the union. She got along with the renowned Clarke Gable after her divorce while Clarke had a turbulent time in his union.

They were able to get married in 1939, but they had no offspring.