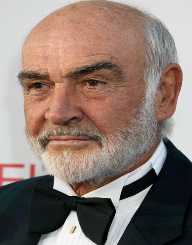 Once dubbed “the sexiest man of the century,” Thomas Sean Connery - better known as Sean Connery, but also as “Big Tam” or “the Rogue with the Brogue” - was born on August 25, 1930, to impoverished parents in Fountainbridge, Edinburgh (Scotland). His mother Euphemia worked as a cleaner and his father Joseph as a factory worker and lorry driver; Connery reputedly slept in the drawer of a dresser as a baby, because the family could not afford a crib.

Growing up in the neighbourhood known as “the street of a thousand smells” (a rubber mill and a number of breweries had premises nearby), young Thomas quickly gained a reputation for being a tough fighter. He was something of a bad boy, frequently shirking school to go fishing or to the movies and often involved in street fights (which he usually won).

Young Thomas attended the Tollcross Elementary School, where his stupid ways occasionally got him into trouble. Nonetheless, he showed an early aptitude for mathematics and later claimed that learning to read was the first big break in his life. He read everything he could lay his hands on, with a particular love of comics, and began making up stories of his own at a very early age. An early fascination with cinema and the movies was also apparent as an indicator of the path he was later to take.

Sean Connery was eight when his brother Neil was born. He was by all accounts delighted with his role as an elder brother; as Neil grew up, the two boys rapidly became inseparable, playing hooky together to go fishing or to the movies and becoming involved in all kinds of scrapes. Leaving school at age 13, Connery worked for three years as a milkman at the St. Cuthbert`s Cooperation before joining the Royal Navy in 1946.  He still bears two tattoos he received during his time in the Navy, one of which reads “Mum and Dad” and the other “Scotland for Ever”; however, his time in the Navy was short-lived. He was discharged after three years after being diagnosed with duodenal ulcers, a condition from which most of the males in his family had suffered.

On leaving the Navy in 1949,  Sean Connery took a long series of jobs to support his family, including bricklaying, shovelling coal, polishing coffins and posing as a male model at the Edinburgh School of Art. He had always been interested in bodybuilding and struggled to save enough money to become a member of the Dunedin Weightlifting club. He was also an excellent footballer, playing for Bonnyrigg Rose and even receiving an offer from Manchester United to play for 25 pounds a week. However, as he later stated, the career of a footballer was generally over by the time he reached 30 (Connery himself was now 23).

However, a breakthrough was soon to come. Sean Connery's associates at the weightlifting club having nominated him for the “Mr. Universe” contest, in 1953 he travelled to London and boldly presented himself as “Mr. Scotland.” The self-confidence paid off; not only was he awarded third prize and a medal in the “Tall Men” group, he also attracted the attention of a local casting director, who invited him to become a chorus member in the musical “South Pacific” which was to play at the Drury Lane theater in London the following year.

While rehearsing for “South Pacific,” Sean Connery decided then and there to become an actor. He had met and become close friends with the actor Michael Caine and also became friends with the American actor and director Peter Henderson; both were to help him immeasurably with advice and support in finding roles and refining his acting abilities. He took his second name Sean as his stage name and the actor now famous as Sean Connery was born! However, it was to be a long hard struggle for success. Over the next few years, he took a succession of minor roles in film and television productions, as well as larger ones in Agatha Christie`s “Witness for the Prosecution” and Eugene O`Neill`s “Anna Christie.”

Still struggling to make ends meet, Sean Connery hired the agent Richard Hatton in 1957, who secured him the role of Spike - a gangster with a speech impediment - in Montgomery Tully`s “No Road Back.” Impressed with his performance, the director Rakoff decided to give him a chance with a leading role as Mountain McLintock in the BBC`S production of “Requiem for a Heavyweight”.

A significant breakthrough, however, was not to come until 1962 when he was chosen to play James Bond in “Dr. No,” a role for which he achieved international stardom. Though the author of the Bond books, Ian Fleming was not overly taken with Sean Connery initially (reputedly describing him as an overgrown stuntman), he was so impressed with the young actor`s performance that he altered Bond`s character to give him Swiss/Scottish heritage. He was to play James Bond in a further six movies, though he reputedly hated both the character and the fact that he had become typecast as a result of playing it.

Throughout the Bond years and also during the twelve year break between “Diamonds are Forever” (1971) and “Never Say Never Again” (1983), Sean Connery continued to work regularly, achieving increasing acclaim for his roles in films such as Alfred Hitchcock`s “Marnie” (1964), “The Man Who Would be King” (1975) and “A Bridge too Far” (1977). He had also married twice. In 1962 he married Diane Cilento, with whom he had one son (born in 1963); the marriage ended in 1973 amid allegations of abuse, and he married his current wife Micheline Roquebrune - with whom he shares a passion for golf - in 1975. On receiving the American Institute`s Award for Lifetime Achievement in June 2006, Connery declared that he was retiring from acting.

The “Rogue with a Brogue” from the Edinburgh slums can point to an impressive number of awards during a highly distinguished career. World Film Favorite - Male in 1972, Best Actor in a Supporting Role in “The Untouchables” in 1988, Best Actor in “The Name of the Rose” (1988), as well as a Bambi award, a Blockbuster award and many other smaller awards and nominations. Queen Elizabeth II knighted Connery in July 2002 and given his second Lifetime Achievement Award in June 2006 (the first being in 1995).

Beneath his sleek and charismatic exterior, Sean Connery was in many ways to remain the tough, hard-hitting kid from the slums. During the filming of the movie “Another Time, Another Place” in which he played the role of Mark Trevor alongside Lana Turner, he was threatened with a gun by Turner`s boyfriend, Johnny Stompanto. He had heard rumors that the two were having an affair as propagated by Hollywood`s tabloid press; Connery disarmed Stompanto with ease and knocked him flat on his back. He later claimed he had to keep low for some time after this incident, owing to death threats from Stompanto`s cronies.

There were darker aspects to his street brawl mentality, however. He openly admitted during an interview with a London newspaper that he felt there was nothing wrong with slapping a woman or putting his hand over her mouth; these ill-considered remarks naturally came back to haunt him when his wife Diane accused him of spousal abuse during their divorce proceedings in 1973.

Sean Connery was also an active sympathizer with - and supporter of - the Scottish National Party, indeed his first nomination for knighthood in 2000 was rejected for this reason. At his knighthood in 2006, Connery wore a kilt.

Sir Sean Connery lives in the Bahamas and rarely appears in public today, though he can occasionally be glimpsed at film festivals, playing golf or at his Greek villa in Portocheli. It is rumored that he is a tax exile, which prevents him both from voting and from continuing to support his beloved Scottish National Party financially. A controversial and in some ways ambivalent personality, his contributions to the world of film and television are nonetheless undeniable. In 2008, he published a book called “Being a Scot,” which is what its title implies - a raw and courageous description of what it means to be a Scot. But then, isn`t that what Sean Connery is all about?