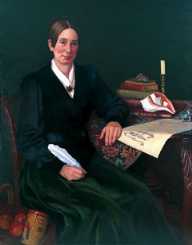 Dorothea Lynde Dix was born on April 4, 1802, in Hampden, Maine, but grew up in Worchester, Massachusetts. She was the first of three children to Joseph Dix and Mary Bigelow. Her father was an itinerant worker, and a Methodist preach. Her parents were both alcoholics, and her father was very abusive, therefore when Dix was 12 years old, she went to live with her grandmother Dorothea in Boston.

In 1821, Dorothea Dix opened a school in Boston, which was sponsored by wealthy families. She also began teaching poor children out of her grandmother’s barn. In 1824, she published her first book, Conversations on Common Things. This book was followed by The Garland of Flora and Private Hours, Prisons and Prison Discipline.

Her health status made her give up the schoolwork, and Dorothea Dix began working as a governess for Dr. W. E. Channing. She traveled to St. Croix with the family and witnessed slavery. In 1831, Dix moved to Boston and established a model school for girls, which operated until 1836, when her health again forced to stop teaching. She then traveled to Europe and was inspired to start working towards equal rights for the mentally ill. She went to England, where she introduced a reform movement known as the lunacy reform.

Dorothea Dix returned to America in 1840 and began carrying out investigations of the care of insane poor in Massachusetts. She found out that individuals were abused and she published her results to the state legislature. Her work resulted in the expansion of the mental hospital in Worcester. In 1944, she began visiting jails and almshouses in New Jersey to carry out a similar investigation. She prepared a memorial of her findings to be presented at the New Jersey Legislature. The report was also introduced in the Senate, and the bill was passed to establish new state facilities for the mentally ill.

Dorothea Dix continued to carry out her investigations in several states. She was instrumental in the founding of the first public mental hospital in Pennsylvania. One of her most significant works was the Bill for the Benefit of the Indigent Insane, which awarded 12,225,000 acres of Federal land to use for the benefit of the insane and the blind, deaf and dumb. Dix sold the property, and the money was spent to build and maintain asylums in several states. During 1854, Dix investigated several mental hospitals in Scotland and found out that they also have similarly poor conditions. In 1857, the reforms were also made in Scotland to improve the conditions of mentally ill.

During the American Civil War, Dorothea Dix worked as the Superintendent of Army Nurses for the Union Army. Firstly she set guidelines to nurse candidates and created requirements for their uniforms. Dix often fired nurses that she hadn’t hired or trained herself, and feuded with army doctors over the control of medical facilities. Many doctors at the time did not want female nurses, but thanks to Dix’s efforts, the War Department introduced an order that granted the permission to Surgeon General and Superintendent of Army Nurses to hire female nurses.

Dorothea Dix implemented the Federal army nursing program, which led to around 3000 women serving the cause. Dix believed in even caring for the Union and Confederate soldiers, which meant that her nurses often gave the only help to the wounded Confederates in the field.

After the end of the war, Dorothea Dix began to raise funds for a monument to the deceased soldiers. Later she continued her work towards improving the conditions of prisoners, disabled and mentally ill. She started with reviewing the damages to the facilities of the South.

In 1881, Dorothea Dix moved to New Jersey, where she began working at the Morris Plains, State Hospital of New Jersey. Although she was not able to travel, Dix continued to correspond with her colleagues in England, Japan, and other countries.

Dorothea Dix was briefly engaged to her cousin Edward Bangs but never married. She died on July 17, 1887. Throughout her life, Dorothea Dix received many honors and awards. She was elected the President for Life of the Army Nurses Association. In 1866, she was awarded two national flags for her service in Civil War. Dix’s name has been remembered with several honors, like the Dix Ward at the McLean Asylum and the Dixmont Hospital in Pennsylvania. A ship in World War II was also named Dorothea L. Dix in her honor.