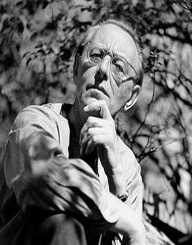 Carl Orff was a German composer who is remembered for his operas and work in music  He exhibited music talent from a very early age. He achieved commercial success with ‘Carmina Burana.’ Carl Orff also set up the Gunther School of music. His ‘Schulwerk’ for students of music has become popular around the world.

Carl Heinrich Maria Orff was born on 10th July 1895 in Munich, Germany. His star sign was Cancer. He was born in a Bavarian family who were originally Jewish by faith. His paternal grandfather converted to Christian, and they became Roman Catholics. Carl Orff s parents were Heinrich Maria Orff and mother Paula Koestler Orff. His father was an officer in the Imperial German Army. His parents were musically talented and trained pianists.  Young Carl was exposed to music at home. Carl Orff started to take piano lessons from his mother at the age of five. He was introduced to cello after two years.

Carl Orff began his formal training in 1905 at the Ludwigs Gymnasium. Two years later he was shifted to Wittelsbach Gymnasium. Carl Orff was selected to the church choir, and he performed solos also. He had very little interest in academics. He concentrated his energy on music. He published his first composition ‘Zarathustra’ in 1911and composed an opera ‘Gisel das Opfer.’ In 1912 Carl Orff joined the Akademie der Tonkunst (Academy of Music) in Munich and graduated in 1914.

After his graduation, in 1915 he began to take piano lessons from Hermann Zilcher. He was employed as Assistant Kapellmeister on Zilcher’s recommendation at the Muenchener Kammerspiele. Though he enjoyed his work he wanted to study more

Carl Orff was drafted in 1917 into the army. He was seriously injured in the World War I and was released in 1918. After the war, he began to work freelance. Carl Orff held the position of assistant Kapellmeister in the National Theatre at Mannheim and the State Theatre in Darmstadt. He returned to Munich in 1919 and began to teach music. His initial works showed a strong influence of Richard Strauss. He later studied Schoenberg’s harmonic theory and the French composer Claude Debussy. He was also influenced by the works of Claudio Giovanni Antonio Monteverdi a 17th-century Italian composer.

The Russian musician Igor Stravinsky appealed a lot to Orff especially his ‘Les notes,’ a pounding evocation of prehistoric rites.

In 1924 Orff founded the Gunther School for gymnasium, music, and dance in Munich with Dorothee Gunther. He remained its head till 1944. He developed new theories of musical education. This came to be known as ‘elementare music.’ It included all aspects of art, dance, music, language, theatre gestures, etc.  He shared these methods in a manual titled ‘Schulwerk. In 1930. There was also a curriculum of songs for children and teachers. They were based on German folk songs and poetry. The same year Carl Orff was named conductor and director of Munich Bach Society. In 1934 when there was government control to weed out Jewish or modernist elements from arts he resigned.

In 1937 Carl Orff staged the reworked version of ‘Carmina Burana’ by Johann Andreas Schmeller. This work was hugely popular with the Nazis and earned him commercial success. It also faced racist taunts because of its unfamiliar rhythm. He then accepted the government offer to write music for ‘A midsummer’s night dream.’ In 1943 his friend Kurt Huber was arrested and killed for anti-Nazi resistance. Orff did not intervene. In 1946 he wrote a letter to the deceased Huber imploring forgiveness. After the war, he continued composing. Some of his famous compositions are Antigonae (1949), Oedipus der Tyrann (1958), Promethus (1968) and De tempo fine Comoedia (1971).

Carl Orff also taught music at Munich Music College, and many of his students have become famous composers. He became the director of The School of Music at Salzburg, Austria and held the position until death in 1982.

In 1920 Carl Orff married Alice Holscher. They had a daughter Godela born in 1921. The marriage did not last long, and they divorced in 1925. His relationship with his daughter was also strained.He married twice more, and they all ended in divorce.

Carl Orff married Liselotte Schmitz in 1960 and remained together till his death on 29 Mar 1982. Carl Orff was buried in Baroque Church in Munich.