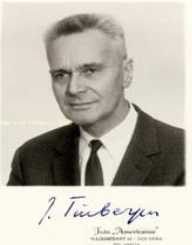 Having developed a high interest in mathematics and natural science early in his life, Jan Tinbergen became a great and famous economist who significantly contributed to the field of economics.

The Dutch economist is also famous for his pioneering and development of econometric models.

Jan Tinbergen successfully linked mathematics and statistics to economic theory and is known around the World for the pieces of advice he offered many developing countries including Venezuela, Turkey, United Arab Republic, Indonesia, Pakistan, among others.

Jan Tinbergen was born on 12th April 1903 at The Hague, the Netherlands to Mr. Dirk Cornelis Tinbergen and his wife Jeannette van Eek, a former primary school teacher. His star sign was Aries.

Jan Tinbergen was the eldest of their five children. His brother Nikolaas Tinbergen was also a famous physiologist who won a Nobel Prize (for physiology) in 1973.

As a young boy, Jan Tinbergen attended the Hogere Bugerschool in The Hague. Such a school was meant for children from middle-class families and who were striving to better their social standing. He believed that studying Economics will give him a better chance of contributing even more to the society. As a result, his interest entirely shifted to economics.

At the end of studies here, the students had to sit for National examinations, and those who passed the exams were allowed to join University. Tinbergen passed his exams and was enrolled at the University of Leiden in1921 where he studied mathematics and physics under Paul Ehrenfest. He completed his course successfully and graduated in 1925.

After his graduation, Jan Tinbergen offered community service in the administration of prison in Rotterdam before moving to Central Bureau of Statistics in The Hague. Later, he went back to the University of Leiden for further studies.

Again, Tinbergen completed his studies and defended his Ph.D. thesis titled, Minimization problems in Physics and Economics, in 1929.

Jan Tinbergen then shifted to the non-academic sector, and here, he worked in Dutch Statistical Office. He also worked, temporarily, with the League of Nations Secretariats in Geneva as a consultant between 1936 and 1938.

In 1945, Jan Tinbergen worked with the Netherlands Bureau of Economic Policy Analysis as a director. After serving in this institution for almost ten years, he finally left in 1955 and went back to the education sector.

Jan Tinbergen worked at the Harvard University, as a visiting professor, for one year before joining the Dutch Economic Institute (formerly the Netherlands School of Economics). Tinbergen was the founder of the Economic Institute at the Erasmus University, Rotterdam in 1956. Four years later, he went back to the non-academic sector and worked as a Fellow of the American Statistical Association from 1960.

Jan Tinbergen's publications, in the area of economic theory, include World Security and Equity (1990), Warfare and Welfare (1987) and Income distribution (1975). Earlier, he had also published Business Cycles in the United States and Economic Policy: Principles and Design (1956).

The Dutch government, especially after the Second World War, used his work to model projections in its economic planning. During this period, Tinbergen was the director of the Central Planning Bureau.

In 1936, Jan Tinbergen developed, for his home country, the first National Comprehensive Macroeconomic Model. This was later applied to the United Kingdom and the United States of America.

In 1962, Tinbergen was awarded an honorary fellowship by the International Institute of Social Studies before receiving an honorary Doctorate from Concordia University (then referred to as Sir George Williams University.)

Jan Tinbergen, together with Ragnar Frisch, was awarded in 1969, the first Bank of Sweden Prize in Economic Sciences in Memory of Alfred Nobel. This was in appreciation for their contribution towards the development and application of dynamic models for analysis of economic processes.

In total, Jan Tinbergen received twenty honorary degrees from various institutions around the World. Besides, a school, the Tinbergen Institute in Rotterdam was established in his honor.

Jan Tinbergen fell sick and died on 9th June 1994 at The Hague, Netherlands.