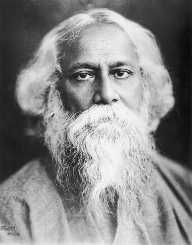 Rabindranath Tagore was a writer and a poet from India. He won the 1913 Nobel Prize for literature.

Rabindranath Tagore or Rav?ndran?tha Th?kura was born on 7th of May 1861, in Kolkata, India. His birthdate according to the Bengali calendar is the 25th of Baishakh.

Rabindranath Tagore was the youngest of the thirteen living children of Debendranath Tagore and Sarada Devi. His father was a leader of the Brahmo Samaj. Hence the family was at the forefront of the Bengal renaissance.

After his coming-of-age rite at eleven, Rabindranath toured India with his father in 1873; there he studied history, astronomy, modern science, and Sanskrit. He also started to read the classical poetry of K?lid?sa.

In 1877, Rabindranath Tagore wrote a set of poems in the style of Vidyapati, claiming it to be a lost work of Bh?nusi?ha.

The experts accepted the work, and after that, he released a short story in Bengali with  "Bhikharini" ("The Beggar Woman"). After that, he moved to Brighton, East Sussex, England.

Rabindranath’s father wanted him to become a barrister, sending him to study law in University College London. He returned to Bengal in 1880 without graduating, after that he opted to study Shakespeare

In 1882, Rabindranath Tagore wrote ‘Nirjharer Swapnabhanga,’ that became one of his most acclaimed poems. Since then he released his Manasi poems, wrote plays and short stories.

In 1890, Rabindranath Tagore began managing his ancestral estates in Shelaidaha, where his family joined him later in 1898. Rabindranath also published Galpaguchchha, a three-volume collection of short stories.

As he hated the normal teaching methods, Rabindranath Tagore founded a school at Shantiniketan in 1901, where he tried his Upanishadic ideals of education. He wrote and published many of his works there.

During his travels, Rabindranath Tagore brought some of his translated works to England. Gitanjali: Song Offerings was published in English, and he became famous for introducing Bengali culture to the world.

Lessons were taught under trees. Rabindranath staffed the school with his Nobel Prize monies and fundraised widely for the school in Europe and the United States between 1919 and 1921.

Rabindranath Tagore wrote 2230 songs, including anthems for India and Bangladesh. However, Sri Lanka’s anthem was translated from a song written by him in 1938. He wrote 80 short stories, seven dramas, and 157 poems.

Learning art at the age of sixty, Rabindranath Tagore had exhibitions in Paris and throughout Europe. He also had two memoirs and four fictional work to his name.

Rabindranath Tagore was the first Non-European Nobel Prize recipient when he accepted the prize in Literature in 1913. King George V granted him a knighthood during the 1915 Birthday Honors.

He renounced the title after the Jalianwala Bagh massacre in 1919.

Oxford University in 1940 awarded Rabindranath Tagore Doctorate of Literature, the ceremony was held in his hometown.

Rabindranath Tagore supported Indian Independence Movement, he opposed imperialism but did not fully support nationalism. His political views were sometimes ambiguous, he urged people to avoid victimology and to seek education.

Rabindranath Tagore firmly believed that free India was not based on its independence from foreign rule, but having the freedom to think and act in conscience. He was almost assassinated for his views in 1916.

In 1883, Rabindranath Tagore married 10-year-old Mrinalini Devi Bhabatarini. She gave him five children before her death in 1902.

Two of his five children, Renuka and Samindranath, died in childhood. Between 1878 and 1932, Rabindranath Tagore visited thirty countries on five continents, where he promoted his culture, work and getting funds for his school.

His health started to fail in late 1937, where he would lose consciousness and become comatose. Since then, his health continually failed until his death on August 7, 1941; he was eighty years old.

Rabindranath Tagore was a man who changed Bengali culture, from language and arts to history and politics.

Rabindranath Tagore was named the "the greatest poet India has produced." His work influenced many other poets from around the world.