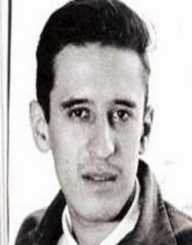 Roque Dalton was a Salvadoran poet and political activist and is recognized as one of the most influential Latin American poets in history.

Roque Dalton was born in San Salvador, El Salvador on 14 May 1935. Dalton’s parents were not married. His father was the American outlaw, Winnall Dalton, who emigrated to Latin America during the 1920s. He met Dalton’s mother following an attempt on his life left him hospitalized. Dalton’s mother, MaríaGarcía, was a nurse who tended to the wounded Winnall. They began an affair, and Dalton was born as a result of this. His father was already married to Aida Ulloa, the daughter of a wealthy farmer. His mother raised dalton, and she ensured Dalton received an education. He attended a Jesuit all-boys school in San Salvador. The illegitimate nature of his birth set him apart in the deeply Catholic nation of El Salvador and in particular in his school. He developed a deep resentment of the students of wealthy parents at his school and the privilege he perceived them of enjoying.

Dalton excelled at his studies and graduated at the top of his class. After graduation, Dalton studied law at the University of Santiago in Chile and in the University of El Salvador. During his time at university, he began to develop an interest in socialism. In Chile, he met the left-wing artist Diego Rivera. The success of the Cuban Revolution in 1959 convinced him to join the Communist Party. His political activism saw Dalton arrested on some occasions.

Due to harassment from police in El Salvador Dalton moved to Mexico and began his writing career. Dalton moved to Cuba in 1961, a large number of exiled leftist activist, poets and artists had flocked there following the victory of the Revolution. These exiles gathered in the Casa de la Americas, which was organization aimed at spreading the socialist movement throughout Latin America. Dalton received military training in Cuba and returned to El Salvador in 1965 but was quickly arrested and condemned to death. An earthquake damaged the jail in which he was sufficiently for Dalton to escape. He quickly escaped back to safety in Cuba and was sent to work as a journalist in Prague, Czechoslovakia. He worked as a correspondent for the socialist publication, The International Review: Problems for Peace and Socialism.

Dalton also published some of his best-known works while in Prague. Taberna y Otros Lugares, one of his most acclaimed works, was published in Prague, as was his biography of Salvadoran communist, Miguel Mármol. Despite his success as a writer, Dalton longed to be a soldier in the revolution. He saw politics as a life and death struggle. However, Dalton was rejected by the Popular Liberation Forces of El Salvador as he was seen as more important to the cause as a poet. He succeeded in joining the People’s Revolutionary Army in El Salvador (ERP) in 1973.

Dalton advocated the development of mass support amongst the peasantry for the socialist revolution; this was at odds with the views of the ERP military leadership. Following a series of reversals in 1975 Dalton was accused of being a CIA informant and was murdered by members of the ERP. A group of ERP members shot him outside his home on 10 May 1975. Dalton’s writings remained influential across the world. He is today honored by El Salvador with his image appearing on stamps.

Roque Dalton had two sons, Roquito and Juan José. Both of his sons would join the Liberation Forces in El Salvador in the late 1970s.