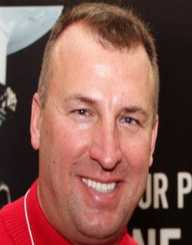 Bret Arnold Bielema was born on January 13, 1970. He has two sisters named Brandi and Betsy. He has shown expertise in football and has specialised in college football.

Bret Bielema went to the University of Iowa to study a degree in marketing. He completed and graduated.

Bret Bielema started showing interest in football while he was a young boy. He went to the University of Iowa where he developed his football career. He played football in college as a defensive lineman. His coach, Hyden Fry identified the unique talent in him and made him the team captain from 1989 to 1992.

Immediately after he graduated, Bielema did not waste the opportunity to play for Milwaukee Mustangs. He built his playing career in the Arena Football League team.

Bret Bielema graduated from University of Iowa toward the end of 1992. In 1993 he went back to the University as an assistant coach. He worked in this position from 1993 to 2001.

In 2002, Bret moved from Iowa to Kansa State University. He became the co-defensive coordinator until 2003. He did the job so well that he was recommended to a similar position at the University of Wisconsin-Madison. He started working in Wisconsin in 2004.

The outstanding skills and passion for football propelled Bielema to higher heights in his career. When Barry Alvarez, the athletic director at the University of Wisconsin, decided to announce his retirement in 2005, he selected Bielema to be the head coach.

Bret Bielema started his career at Wisconsin at a high notch. In his first season in 2006, Wisconsin Badgers finished the regular season 11-1 with a 7-1 win in Big Ten Conference play. On September 16, 2006, the Wisconsin Badgers had a massive victory of 14-0 over the San Diego State. The success made Bielema become the third head coach of Wisconsin University to win the first three introductory games of his coaching career.

Bielema's coaching career continued to be a profound success story after his team won 24-3 over Purdue University on October 21. The win helped him to be in a tie position for the most wins by a coach in his first year at Wisconsin University. He had a total of seven wins in his first year as the head coach of the Wisconsin University. The other two coaches to have achieved this were Philip King in 1896 and William Juneau in 1912.

On October 28, 2006, the Wisconsin Badgers won a match 30-24 over Fighting Illini. The achieved Bielema the fate of the first coach in the history of Wisconsin University to win a total of eight games in his first season. Bielema did not stop there. He continued his winning form with a 13-3 win on November 4, 2006, against Penn State Nittany Lions. The win was the ninth in his very first season.

Bret Bielema's football coaching star continued to shine he became the first-ever head coach in Wisconsin and Big Ten History to win ten games in his first season. The achievement came as a result of a 24-21 victory against Iowa Hawkeyes on November 11, 2006.

Wisconsin Badgers won against University of Buffalo on November 18, 2006, with a significant margin of 35-3. The win made him the first head coach to win eleven games in the first season.

On January 2007, he won 17-14 against Arkansas Razorblades in the Capital One Bowl. He completed his season with 12-1 aggregate wins, becoming the third coach in history to win twelve games in one season.

Bret Bielema's coaching career saw him lead Wisconsin to win 17 of the 18 games they participated in. This was a sterling performance which represented the third best start of a head coach's career. He was only beaten by Fielding H Yost (1901-1905) of Michigan and Urban Meyer of Ohio State.

In 2010, Wisconsin Badgers continued with the excellent performance when they beat Ohio State 31-18. This was not a mean achievement since Ohio State was ranked the best team by that time. The win was the first victory over the best-ranked team since 1981.

In the same year, Bielema became a finalist in Bear Bryant Award usually given to the best college football coach every year. He was competing for the award with Chris Ault(Nevada), Gene Chizik(Auburn), Mark Dantonio(Michigan), Jim Harbaugh(Stanford), Chip Kelly(Oregon), Gary Patterson(TCU), Bobby Petrino(Arkansas) and Mike Sherman of Texas.

Bret Bielema continued to do well in his coaching career, and on December 4, 2012, it was made public that he was to leave Wisconsin University. He was headed to Arkansas where he became the head coach of the Arkansas Razorbacks.

He complained that his assistant coaches at Wisconsin were not paid well. He also left Wisconsin with the intention of playing in the Southeastern Conference. He became the head coach, a position previously held by John Smith.

His entrance at Arkansas was not all rosy. His first season resulted in the worst performance ever recorded by the Arkansas Razorbacks. They did not win even a single game at the Southeastern Conference with an overall record of 3-9.

Bret Bielema improved in his second season. Arkansas completed the season at 7-6. He claimed victory in his first two games of Southeastern Conference competition in November. The wins were against LSU and Ole Miss but lost the remaining game to Missouri. Razorbacks, however, became the first college football team to beat ranked opponents

Bielema led the Arkansas Razorbacks to win a Texas Bowl by defeating Texas 31-7 in the postseason.

In the third season, Bielema's Razorbacks started at a slow pace. They lost to Toledo and Texas. The second half of the season was favouring the Razorbacks where they went 5-1 over the final six games.

He beat his former mentor Bill Snyder in the AutoZone Liberty Bowl. The Arkansas Razorbacks beat Kansas State 45-23. The win enabled the Razorbacks to finish with a record 8-5.

His fourth season as the head coach at Arkansas ended with two humiliating defeats. They were beaten by Missouri and Virginia Tech in the Berk Bowl in 2016. The two teams handed the Razorbacks the most significant loss since 1952.

Bret Bielema remains the highest paid state worker in entire Arkansas. His salary is a whopping $ 4,100,000

Bret Bielema was named the first Big Ten Coach to win twelve games in his first season. This happened in 2006 while he was the head coach at Wisconsin.

He became a finalist for the Bear Bryant Award for the best coach of the year.

Bret Bielema is married to Jen Hielsberg since March 11, 2012. They got married in Madison. He first publicly announced his relationship with his girlfriend on April 1, 2011. They dated until the marriage.

Jen Bielema went public on her Twitter account about her pregnancy in December 2016. Bret later said they were expecting the child in July 2017.