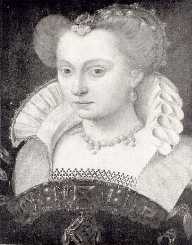 Margaret of Valois was the Queen of two kingdoms, one being Navarre and the second being France. Born as Marguerite de Valois on 14th May 1553, she was the seventh child and the third daughter of King Henry II of France and his wife, Catherine de' Medici. Three of her brothers viz. Francis II, Charles IX, and Henry III were the future kings of France and her sister Elizabeth of Valois was the Queen of Spain as she was the third wife of Philip II, the King of Spain.

Margaret’s mother was known for her manipulations. Margaret always had a strained relationship with her brothers.

On 18th August 1572, at the young age of 19, Margaret of Valois was married off to her distant cousin Henry. The wedding was solemnized at the Notre Dame Cathedral in Paris. Henry became the King of Navarre after the death of his mother, Jeanne d'Albret. King Henry’s mother Queen Jeanne was in staunch opposition to the marriage and thus her untimely death just a few days before the wedding was eyed with suspicion.

It is believed that Margaret’s mother Catherine had used her knowledge of poison to kill Queen Jeanne. King Henry, the groom, was a Huguenot and hence was prohibited from entering the Church for the ceremony. The liaison between the two was believed to be a propagator of harmony between the Catholics and the Protestant Huguenots.

However, the actual motive behind the marriage was revealed soon after that. Just six days after the ceremony, on ‘St. Bartholomew’s Day’, Roman Catholic factions instigated mob violence against the Huguenots and assassinated many of them. Infamous as the ‘Bartholomew’s Day Massacre,’ thousands of Huguenots and many prominent Protestants leaders including Admiral Gaspard de Coligny was assassinated on this day. It is believed that Catherine de' Medici coerced her son Charles IX to pass the order for the assassinations.

Margaret of Valois played a crucial role during the assassinations. She saved the lives of many prominent Protestants including her husband by sheltering them in her room and by prohibiting the assassins from entering her room. In the post-massacre period, King Henry feigned conversion to Catholicism. In 1576, after spending more than three years in imprisonment, Henry fled the country of Paris leaving behind his wife, Margaret. After getting permission to reunite with her husband finally, Margaret and Henry spent the next three and a half years in Pau. Though the couple lived together and had a mutual admiration, they frequently exchanged war of words. Both of them were also actively involved in extramarital affairs.

In 1582, a sick Margaret of Valois moved to the court of her brother Henry III in Paris. But within a short span of time, her brother was bothered by her sordid reputation and thus asked her to leave his court. After several negotiations, Margaret was allowed to return to the court of Navarre but did not receive a warm welcome. Deeply impacted by the icy reception and with a view of putting an end to her difficulties, Queen Margot took over the city of Agen by executing a coup d'état. But she soon faced a revolt from the citizens of Agen and had to flee to Carlat.

In 1586, Margaret of Valois was incarcerated as a state prisoner by her brother Henry III. Margaret had been divorced from her husband and after the death of her brother; she became a prisoner of exile under the rule of her husband Henry IV. She was kept in captivity in the castle of Usson in Auvergne for 18 years.

Margaret of Valois utilized this time to pen down her thoughts in the form of poems and her memoirs. Her memoirs were short stories that described her strained relationship with her husband and her disputes with her brothers. The memoirs, which are till date considered as the best literary works of that time, were published posthumously in the year 1628.

By the year 1589, all her brothers had died leaving behind no sons. In the absence of any heir, Margaret of Valois' husband, Henry IV was crowned the King of France thus making Margaret the Queen consort of France. King Henry IV continued to keep many mistresses the most famous being Gabrielle d'Estrées. He fathered four children with Gabrielle. Queen Margot’s marriage was annulled in the year 1599, but as per an agreement, she was granted the permission to retain the title of the Queen.

Marguerite de Valois was the epitome of beauty and had an impeccable fashion sense. She was known to be one of the most fashionable women of her time. Her life is filled with salacious stories, and in her lifetime, she had many lovers; the most famous being Joseph Boniface de La Môle, Jacques de Harlay, Seigneur de Champvallon and Louis de Bussy d'Amboise. Before marriage, she was romantically involved with Henry of Guise, but her parents strictly opposed their love affair.

Her mother, Catherine, often misused her for her benefits. She made several futile attempts by trying to arrange her marriage to Don Carlos, the son of King Philip II and also with King Sebastian of Portugal. They ultimately married her off to the King of Navarre.

During her last years, Margaret of Valois spent some time at the ‘Hostel de la Reyne Margueritte’ on the banks of the river Seine before reconciling with her husband and going back to Paris. She devoted her final years to the upliftment of the poor and started teaching arts while simultaneously nurturing the King’s children. Queen Margot breathed her last on 27th March 1615 at the ‘Hostel de la Reyne Margueritte.’ Her burial took place at the ‘Basilica of St. Denis,’ but the casket went missing mysteriously.

The scandalous Queen’s life has served as an inspiration for many poets and film-makers. Alexandre Dumas, père's novel ‘La Reine Margot’ and William Shakespeare’s comedy ‘Love's Labour's Lost’ are based on her life.