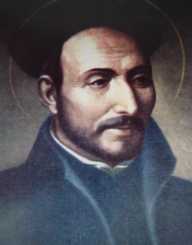 The Catholic saint Ignatius of Loyola was born in 1491 in Spain, a small village at the southern end of Azpeitia. He was one of thirteen children, and his mother died when he was a child. Subsequently, he was raised by Maria de Garin, a local woman in the village. His family belonged the aristocracy.

When Ignatius of Loyola was sixteen years old, he started working for the treasurer of Castile, Juan Velazquez. Two years later he became a soldier, fighting under Antonio Manrique de Lara, Duke of Nájera and Viceroy of Navarre. It was around this time he became known as Ignatius, a variation of Inigo. He gained a reputation as an able soldier and dualist and was put in command of troops.

Badly wounded in 1521 while defending Pamplona against the French a cannonball damaged his legs. Doctors told him that he would last a month, but he began to improve in June 1521. One leg was partially amputated, and he became to heal. During his time he confined to bed. He used his time to read widely and the story The Life of Christ inspired him to start a religious journey, part of which was the desire to convert non-Christians.

In early 1522 Ignatius of Loyola entered Santa Maria de Montserrat, a Benedictine monastery. When he left the monastery, gave away all his possessions and walked to the town of Manresa. He worked in the local hospital and begged for food, spending time in a cave and working on his spiritual life. After ten months of working in the hospital and living in a cave, he started a journal. This journal later formed the basis of his teachings. In 1523 he made a pilgrimage to the Holy Land with the intention of finding converts. After two weeks he was asked to leave because of unrest in the Holy Land.

Ignatius of Loyola then decided to further his education and returned to Barcelona where he studied under Master Jeronimo Ardevol where he did his primary education. He then studied at university level in Alcala and Salamanca. His intellectual activities were brought to the attention of The Inquisition who accused him of preaching without formal training in theology, but afterward, they left him alone. When he was in his late thirties, he became a student at the College of Saint Barbe at the University of Paris where he was educated in a structured manner which later influenced the Jesuits in their teaching. At the age of 44, he was awarded a master’s degree.

During his time at university, Ignatius of Loyola formed a group with Peter Faber and Francis Xavier that became known as Friends of the Lord. They began to attract other members. After a visit to Pope Paul III in Rome, the group was approved as an official religious order. The group wanted Ignatius for their leader, but he declined, stating that given his earlier life experiences, he was not worthy. Eventually, he was persuaded to be their first leader of the Society of Jesus, the Jesuits.

His feast day is the 31 July. Ignatius of Loyola is the patron saint of the Society of Jesus, soldiers, education, and educators.