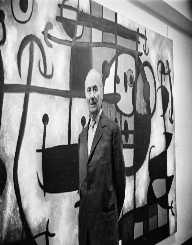 Joan Miro was a famous artist from Spain. Joan Miro is best known for his works in surrealism.

Joan Miro was born on April 20, 1893, in Barcelona, Spain. His father was a goldsmith. Miro's interest in art started early in his childhood.

Joan Miro took art lessons at the age of seven and realized that this was his passion in life. His family wanted him to find more traditional, stable employment.

Joan Miro went to business school at the age of 14 to appease his family's interests. However, Joan Miro suffered a nervous breakdown while working as a clerk. His passion for art helped him in his recovery, and his parents conceded to his wishes to go to art school.

At that point, Joan Miro went to an art school in Barcelona, the Cercle Artistic de Sant Lluc. One of his instructors was Francisco Gali. Joan Miro felt that he gained a lot of insight into modern art, space, and proportions from his teacher.

In 1918, Joan Miro presented his first solo exhibit at the Dalmau Gallery. Unfortunately, it was poorly received, and he was ridiculed for his work. However, Joan Miro continued to work on his craft.

Joan Miro learned about new ideas including Cubism. Joan Miro lived in both France and Spain during this time of his career. His first painting that was pivotal in his career was “The Farm.” It was painted between 1921 and 1922. It caught the interest of writer Ernest Hemingway who purchased the piece.

Joan Miro was active in some art communities. In 1924 Joan Miro became one of the Surrealists. In his work at that time, he explored the symbolism and dreamlike content. Some titles of his work at that time were “The Policeman,” “Head of a Catalan Peasant,” and “Dog Barking at the Moon.” By the 1930s, Joan Miro explored art beyond the canvas. He was working on collages as well as sculptures. Joan Miro was also working with ballet companies in creating the sets as well as the costumes for their productions. His artwork often reflected the social criticisms of the time. The Spanish Civil War was taking place, then World War II. Some of his work at that time included “The Reaper” mural and “Head of a Woman.” His collection of ceramics with Jose Llorens Artigas were an expression of war as they were misshapen or with broken pieces. Over time, Joan Miro would be recognized for his mixed media work as well as his paintings.

Joan Miro gained popularity around the world; he was commissioned for larger works while his earlier paintings were exhibited in museums. This included a tapestry for the World Trade Center in New York City, the ceramic “Joan Miro Wall” in Ludwigshafen, Germany, and Miro's Chicago (originally named “The Sun, the Moon, and One Star”)in Brunswick Plaza in Chicago, Illinois. “Joan Miro's Chicago” would be one of his last works of art before his death.

The work of Joan Miro influenced artists of the late 20th century. Those who are known for American abstract expressionism like Jackson Pollack, Robert Motherwell, and Alexander Calder are just a few examples.