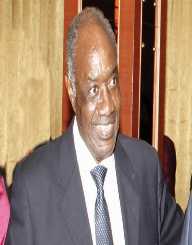 Zambian politician Mainza Chona was born on the 21 January 1930 in the village of Nampeyo in what was then Northern Rhodesia in Africa. Still, under British colonial rule, the area would become part of Zambia upon independence in 1964. His father Hameja Chilala was a village chief, Chief Chona, and his mother was Nhandu.

Mainza Chona was educated at Chona Elementary School, Chiluni Catholic Mission and the Munali Secondary School in the capital city, Lusaka, graduating in 1951. Initially, he worked as a court interpreter in Livingstone, Zambia and then took advantage of a scholarship to study law at Gray’s Inn in London, England (1955-1958).

Early Exposure To Politics In London

It was during his years studying law in London that Mainza Chona became politically aware. He met South African writer Doris Lessing and other intellectuals who were politically active and supportive of African independence. He also met Kenneth Kaunda for the first time. Together with Kaunda and others, he would go on to shape the political landscape in his homeland.

ZANC was subsequently banned in 1959 and Kuanda was held in custody. Mainza Chona had been a member of the ANC, and when he returned home in 1958, he became active in the party. However, he also became disillusioned with Nkumbula’s weak leadership on the question black majority rule. The party was again divided, and Mainza Chona left he became the leader of the United National Independence Party which effectively replaced the banned ZANC. When Kaunda was released from prison in 1960, Mainza Chona handed over the leadership to him.

In 1960 the Northern Rhodesian government charged Mainza Chona with sedition, and he left the country to live in the UK where he worked as the United National Independence Party’s ambassador. He returned to Northern Rhodesia in 1961, and the party elected him as the National Secretary. In 1964 when Kuanda formed a government, Chona was appointed Minister of Justice.

Independence was declared in October 1964, and the name of the country was changed from Northern Rhodesia to Zambia.

Mainza Chona went on to hold many different ministerial posts and positions in government including being the Zambian ambassador to the United States in 1969. In 1970 he became Vice-President of Zambia. He was heavily involved in the writing of the Zambian constitution and was head of the Choma Commission in 1972. The nation was moving towards a one-party democracy under Kuanda and in December 1972, the Second Republic was formed, and in 1973, the National Assembly accepted the new constitution. He went on to be Prime Minister (1973-1975), Attorney-General (1975-1977) and Prime Minister (1977-1978). From 1978 until 1981, he was Secretary-General of his party’s Central Committee.

Mainza Chona also served on various international committees and congresses. He was also chairman of the UN Inter-Action Council of Former Heads of Government.

He was also a published author and wrote a novel Kabuca Uleta Tunji.

Mainza Chona, who was considered by political scientists as one of the founding father’s of Zambian independence, died in hospital in Johannesburg on the 11 December 2001.