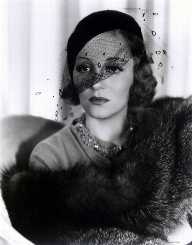 Tallulah Brockman Bankhead was born 31st January 1902, to William and Adelaide Bankhead. She was born in Huntsville, Alabama, in the United States.

Bankhead had an older sister who had been born prematurely and was vision impaired. Bankhead’s mother died three weeks after Bankhead’s birth.

Her father’s side of the family were mostly politicians, and her father was Speaker of the U.S. House of Representatives between 1936 and 1940.

Bankhead’s father took the death of his wife badly, and went through depression and alcoholism, leaving Bankhead and her sister to be looked after by their grandmother. As the girls grew, their grandmother had trouble looking after the girls, and it was suggested they be sent to a convent school by their father.

Tallulah Bankhead and her sister were enrolled at the Convent of the Sacred Heart in New York. They moved schools regularly over the next few years as their father’s work took him to Washington.

Bankhead had also learned that performing gave her the attention she wanted, and she found she was talented as well.

While her sister got married at 16, Tallulah Bankhead decided she was going to pursue a career in acting.

Bankhead was 15 when she was one of several winners in a contest. She sent her photo into the magazine Picture Play, and the winners were going to win a trip to New York and have a role in a movie.

To Bankhead’s disappointment, the role was a minor one, and she was only paid $75 for three weeks work. She did, however, make the most of her time, and found her place in New York City.

She moved into the Algonquin Hotel, which was known for the artistic and literary community that frequented there. Bankhead was soon friends with Estelle Winwood, Eva Le Gallienne, and Blyth Daly.

They were all either lesbians or bisexual. While Bankhead never openly admitted to her bisexuality, she was linked with many major female actresses over the years, including Greta Garbo and Marlene Dietrich, and singer Billie Holiday.

Bankhead’s career began with roles in three silent movies during 1918. She then debuted in a stage production called The Squab Farm at the Bijou Theatre in New York. Bankhead felt much more comfortable on stage and felt that was where she belonged.

Several more stage productions followed between 1918 and 1922, but although Bankhead’s performances met with good reviews, the productions were not successful.

Tallulah Bankhead decided to move to London to try and chase more success there.

In 1923, Bankhead debuted in her first London production. During the following eight years she performed in 12 productions in London, and she began to make a name for herself.

She returned to the U.S. in 1931, settling in Hollywood. Her first four movies were not very successful. Although Bankhead found Hollywood and the film industry boring, she liked the money that could be earned, so persevered with her acting for two years.

In 1933, Tallulah Bankhead became gravely ill from venereal disease. She had to undergo an emergency hysterectomy which took several hours. She recuperated in Alabama, and then in 1934, went back to England. A short time later, she was asked to return to New York to perform in the stage production of The Little Foxes.

Bankhead returned to New York to perform on Broadway, but once again, she performed in various plays that were not successful.

The Little Foxes ran in 1939, and Bankhead won acclaim for her role and performances. Bankhead finally won the fame she had been wanting and followed with other productions that all proved very successful, including, The Skin of Our Teeth (1942-43), and Lifeboat (1944).

Bankhead then starred in Private Lives and toured with the production before taking it to Broadway. The play ran for almost two years over 1948 and 1949 and made her a very rich woman. In all her future work, Bankhead was able to take 10% of the gross and had lead billing over the other cast members.

Tallulah Bankhead then moved into radio, and in 1950 was cast as the host of The Big Show.

As the 1950s moved on, Bankhead’s career began to slow. She remained in the public eye, unfortunately for mostly the wrong reasons, as her personal behavior was not considered acceptable much of the time.

Tallulah Bankhead continued to perform across various mediums including television, radio, Broadway, and the movies. She also performed in Las Vegas in 1953 and was paid $30,000 per week, which was considered a fortune at the time.

During this period, Bankhead had become dependent on drugs and succumbed to depression. Her career moved into decline over the next few years.

She wrote her autobiography which was released in 1952. It was called, Tallulah: My Autobiography.

In the late 1950s, Tallulah Bankhead moved to East 62nd Street. On 12th December 1968, she died at the age of 66. She was at St. Luke’s Hospital in Manhattan at the time, and cause of death was given as pleural double pneumonia, with complications from emphysema.

Bankhead received several awards and honors, including the following:

In 1937, Tallulah Bankhead married John Emery, a fellow actor. They divorced in 1941.

Tallulah Bankhead has a reputation of being one of the best stage performers of the last century. She was a versatile actress and was able to perform across both dramatic and comedy roles.

She was one of the first actresses to be known by first name only in both the U.S. and England.

Tallulah Bankhead did things her own way and lived her life how she wanted, giving no regard to what other people thought.

While this quality was endearing during her career, towards the end of her life, sadly, it kept her in the media for the wrong reasons.