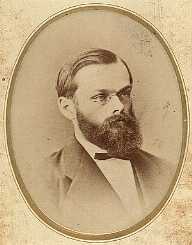 Ferdinand von Mueller’s sister, Bertha had some health issues and was therefore advised to seek for a warmer climate to improve her condition. An astute botanist of the time, Ludwig Preiss, suggested her being taken to Australia, so Ferdinand von Mueller and his two sisters, Bertha and Clara, left Bremen in 1847. While sailing to Australia, he is said to have brought some plants out of the water and had them analyzed.  On December 18, 1847, the siblings arrived in Adelaide.

He moved to Melbourne, the capital of Victoria in 1851 to open a chemist shop in the gold diggings. He had all this while contributed some papers in the field of botanic to German periodicals and sent his maiden paper to the Linnean Society of London in 1852. The paper, titled "The Flora of South Australia," gained him recognition in the botanical circles.

Ferdinand von Mueller joined the exploration of Augustus Gregory ordered by Duke of Newcastle to explore River Victoria and other sites. Ferdinand von Mueller became one of the first for to reach Termination Lake in 1856. During this exploration, he discovered almost 800 plant species new to Australian science. That same year, he published the work Definitions of Rare or Hitherto Undescribed Australian Plants. He was a member of the Victorian Institute for the Advancement of Science, later Philosophical Institute of Victoria from 1854 to 1872. He was appointed the director of the Royal Botanic Gardens, Melbourne from 1857 to 1873, where he introduced many plants and also came up with the qualities of the bubble gum, which he introduced into North and South Africa, Europe and California.

Ferdinand von Mueller published a lot of his works with his two volumes of Plants of Victoria being published from 1860 to 1865. From 1862 to 1881, Ferdinand von Mueller published 11 volumes of his Fragmenta phytographicaAustraliae and also illustrated on the Eucalyptus, Myoparacaea, Acacia, and Salsolaceae in his other books. His other works includes, Index perfect us ad Caroli Linnaei : species plantarum / collatore Ferdinando de Mueller, (1880), A descriptive atlas of the eucalypts of Australia and the adjoining islands (1879–1884), Iconography of Australian species of Acacia and cognate genera (1887), Select extra-tropical plants readily eligible for industrial culture or naturalisation (1891).

Ferdinand von Mueller also published Introduction to botanic teachings at the schools of Victoria (1877), The organic constituents of plants and vegetable substances and their chemical analysis (1878), Manuel de l'acclimateur (1887), Fragmenta phytographiæ Australiæ /contulit Ferdinandus Mueller (1858–1882). The rest are The plants indigenous to the colony of Victoria, Volume 1 (1860–1862), Key to the system of Victorian plants (1887/88) and The Vegetation of the Chatham Islands (1864).

Ferdinand von Mueller was never married. He died on October 10, 1896, and interred in the St Kilda Cemetery.

The Australian and New Zealand Association for the Advancement of Science initiated the Mueller Award in 1904 to honor "a scientist who is the author of important contributions to anthropological, botanical, geological or zoological science, preferably with special reference to Australia." He has been named after Mueller Ranges, Mount von Mueller, Lake Mueller and Mueller River among others.