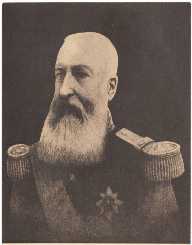 Leopold Louis Philippe Marie Victor was born 9th April 1835, to Leopold I of Belgium, and his second wife, Louise of Orleans. He was born into the house of Saxe-Coburg and Gotha. Leopold was born in Brussels, Belgium and was one of three children, although his brother died before he was born.

Due to the early death of his brother, Leopold was born as the heir to the throne. His mother died when he was 15 years of age. At the age of nine, Leopold was given the title of Duke of Brabant. He was also given the rank of sub-lieutenant in the army. Leopold served in the army until 1865 when he ascended the throne and attained the rank of lieutenant-general.

Leopold began his public service at the age of 20. In 1855, he joined the Belgian Senate. He was a keen member of the senate, particularly in the area of trade, and began to push for Belgium to acquire other colonies. Between 1854 and 1865, Leopold traveled extensively, visiting countries such as India, China, Egypt and the Mediterranean. His father died in 1865, and on December 17, Leopold ascended the throne, at the age of 30. He outlined his plan in a letter to his brother, Prince Philippe, in 1888. He stated the country needed to be strong and prosperous and would achieve this through the acquisition of other colonies.

Several important political issues happened during the reign of Leopold. In 1879, the Liberals, who were in power, created free, compulsory, primary schools, that the state funded. At the same time, they stopped supporting primary schools run by the Roman Catholic institution. In 1880, the Catholic Party achieved the majority in parliament and once again the state funded Catholic schools. A few years later, in 1885, the Labour Party was born. Male suffrage was undertaken in 1893. Another important advancement was laws that came in preventing child labor, stating that children under 12 couldn’t work in factories. Workers were also to be given Sundays off and to be compensated for workplace accidents.

Through the profits generated from the natural resources in the Congo, Leopold was able to commission many projects, public works, and buildings to be completed. He also amassed a great personal fortune but had the foresight to create a Royal Trust so that the wealth could not be diverted overseas. This was due to his daughters all being married to foreign princes. By creating the Royal Trust, future generations of the Belgian Royal family could enjoy the wealth, but everything was owned by the Royal Trust, and thus, belonged to the Belgian nation. In 1902, Leopold survived an assassination attempt, much to the joy of the Belgian people, and other leading dignitaries in Europe.

Leopold still believed that colony acquisition was the best way forward, but when he was unable to secure any through official capacities, he tried to acquire them on a personal level. His first attempt was to take over the Philippines, but this failed after several attempts. He then moved on to Africa and Asia. He failed several times, but then created a holding company, and with the help of his explorer, Henry Morton Stanley, through deception, Leopold founded the Congo Free State. He laid claim to the area, espousing that he would improve the lives of those living there, and at the Berlin Conference in 1884-1885, the claim was approved by the other colonial nations of Europe.

Once the claim was authorized, Leopold had millions of Congolese citizens slaughtered or mutilated. This included children. Leopold created the Force Publique, which was the equivalent of an army, and they ran the Congo Free State. They were brutal in their authority. Estimates of the slaughter ranged from one million to fifteen million.

Leopold didn’t care and happily made a fortune from the activities that took place in the Congo – primarily the collection and sale of ivory, and the harvesting and selling of rubber.

News of the atrocities caused a huge scandal, and in the early 1900s, the Belgian government forced Leopold to give up his control of the colony, and a civil administration was installed in 1908 to take over management.

Leopold ruled Belgium for 44 years, the longest reign by a Monarch in that country.

Leopold married Archduchess Marie Henriette of Austria in 1853 and remained married until 1895. She was very popular with the people and was a very talented artist and musician. The couple had four children – three daughters and a son. Their son was also called Leopold. He died from pneumonia at the age of nine and left Leopold II without an heir to the throne. They tried to have another son but were unsuccessful, and eventually, they separated as the marriage had become an unhappy one.

Leopold also had several mistresses, but one in particular, Caroline Lacroix, he had a relationship with for over a decade. They married in secret just a few days before his death, due to her unpopularity with the people of Belgium. As the marriage had not been legitimized through a civil ceremony, Lacroix was not able to have her children officially recognized, although Leopold had left her a great deal of wealth.

Whilst Leopold II is recognized for having built many buildings and structures in Belgium, and also for having several very important pieces of legislation pass under his rule, it is very unfortunate that he was also responsible for great atrocities in the Congo Free State, and the slaughter of millions of innocent lives.