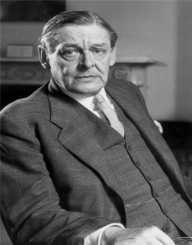 T. S.Eliot was born on September 26, 1888. He was a poet, literary critic, playwright, and editor. When he was sixty years old, he received the Nobel Prize in Literature for his contribution to poetry.

Thomas Stearns (T. S.) Eliot was born on September 26, 1888, in St. Louis, Missouri. He was born into a distinguished family. He was born to Henry Ware Eliot who was an industrialist and philanthropist and Charlotte Champe Stearns who was a school teacher and poet. He was brought up alongside six siblings. He did not have many friends growing up, so he spent his time reading stories about savages and the Wild West. He was intrigued by the book ‘The Adventures of Tom Sawyer.’

In 1898, T. S.Eliot joined Smith Academy where he studied Latin, French, and German among other languages and subjects. He wrote his first poems at the age of fourteen, but he destroyed them because they were gloomy. In 1905, he joined Milton Academy, Massachusetts for a preparatory year. In the same year he published his works ‘Song’, A Fable for Feasters,’ ‘The Man Who Was King’, ‘A Tale of a Whale’ and ‘Birds of Prey.’ In 1906, he joined Harvard University where he studied philosophy. He continued to write and contributed his works to the Harvard Advocate. In 1909, he graduated from Harvard with a Bachelor of Arts Degree. In the same year, he worked as a philosophy assistant at the University.

In 1910, T. S.Eliot moved to France where he studied philosophy at the Sorbonne University located in Paris. He began developing his style of writing while in Paris. In 1911, he moved back to Harvard where he studied Sanskrit and Indian Philosophy. He later received a Scholarship to Merton College in Oxford, and so he moved to England.

In England, T. S.Eliot visited London several times. In London, he met many writers and poets. He met Ezra Pond who was a poet in London’s Literary Circle. Ezra introduced him to many poets because of his talent. He was also introduced to writers, artists, and intellectuals in London. Ezra played a significant role in assisting him in publishing his works. In 1915, he began teaching French and Latin in Highgate Junior School, London. He also took extra classes in the evening at the Birkbeck at the University of London where he taught English. In the same year, he played a major role in the publishing of ‘The Love Story of J. Alfred Prufrock’ in ‘Poetry.’

In 1916, T. S.Eliot finished his thesis, but he could not get to the United States to present it because World War I. In 1917, he became a clerk at the Lloyds Bank in London. In the same year, he became a literary editor of Egoist. Egoist was a London Literally magazine which published modernist works. In 1917, his first book of poems ‘Prufrock and Other Observations’ was published. In 1919, his seminal work ‘Tradition and the Individual Talent’ was published in the Egoist.

In 1920, T. S.Eliot published his book ‘Sacred Wood.’ In 1921, he took a leave from the bank to go to Margate in Kent to finish up his poem ‘West Land.’ In 1922, ‘West Land’ was published in the Criterion which was a literary journal founded by him. In 1925, he joined Faber and Gwyer which was a publishing firm. In the same year, his poem ‘The Hollow Men’ was published.

In 1927, T. S.Eliot converted to Anglicanism and became a British citizen. In 1930, his poem ‘Ash Wednesday’ was published. In 1939, he published the book ‘Old Possum’s Book of Practical Cats.’ He later became an editor for the Wesleyan University Press. His best book was titled ‘Four Quarters’ which many scholars refer to as his last great work.

In 1915, T. S.Eliot married Vivienne Haigh-Wood for purposes of staying in England, but they were never close to each other. In 1933, they separated, and Vivienne was committed into an asylum by her brother. She died in 1947. In 1957, he married Esme Valerie Fletcher. He died on January 10, 1957 of emphysema at his house in London. He was cremated at Golders Green Crematorium, London. His ashes were taken to East Coker and buried at St. Michael and All Angel’s Church. After his death, his wife preserved his legacy by editing and adding several notes to ‘The Letters of T. S. Eliot.’