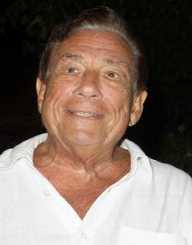 Born on April 26, 1934, Donald Sterling born Donald Tokowitz is an American attorney, businessman, and sports enthusiast. He went into sports administration as the owner of the Los Angeles Clipper National Basketball Association (NBA) from 1981 to 2014. He was however given a lifetime ban from the league and slapped with a $2.5 million fine after a racist comment made in private came into the public domain. After his ban from the game, his wife offered to sell Clippers to former Microsoft CEO, Steve Ballmer for $2 billion and even though Sterling contested that in court, the NBA Board approved the sales on August 12, 2014.

Donald Sterling was born on April 26, 1934, in Chicago, Illinois to Susan and Mickey both immigrants. At age two he moved with his family to Boyle Heights in Los Angeles. There he was educated at the Roosevelt High School becoming a class president. While in school he was involved in sports and joined the school’s gymnastics team and graduated in 1952. He then enrolled at the California University, Los Angeles School of Law and graduated in 1956.

Donald Sterling later studied law at the Southwestern University School of Law, Los Angeles and graduated in 1960. He only changed his surname from Tokowitz to Sterling when he got married and on December 9, 1959, filed a petition to do. The reasons were that friends found it difficult pronouncing Tokowitz and cited eminent financial gains with the name change.

Donald Sterling started his law practice as an independent divorce and personal injury attorney in 1961. He also went into real estate after purchasing a 26-unit apartment building in Beverly Hills. He invested more into real estate by purchasing the Lesser Towers located at Westwood area of Los Angeles which is currently known as the Sterling International Towers. Sterling's other real estate investments include the acquisition of the California Bank Building in Wilshire Boulevard now known as the Sterling Plaza. He is estimated to have 162 properties in Los Angeles only.

Donald Sterling purchased the NBA franchise the San Diego Clippers upon suggestion by the owner of Los Angeles Lakers, Jerry Buss. He bought the struggling Clippers for $12.5 million in 1981 and pledged to spend huge sums on the team to make it a strong contender. He then embarked on several ads and marketing campaigns to gain the goodwill and support. This, however, did not result in an instant success as the team Clippers had several tough seasons going cup drought until the 1991-1992 season.

Donald Sterling's ownership of Clippers ran from 1981 to 2014. His days with the team came with several fines including that of 1982 fine of $10,000, the highest in NBA history against an owner at the time for his comment that he would want the Clippers to finish last to draft a player like Ralph Sampson. In 1984, Donald Sterling moved the team from San Diego to Los Angeles with the approval of the NBA. This act also attracted a fine of $25million.The fine was however reduced to $6 when he sued the NBA for $100 million.

Donald Sterling is known for his predominantly racial comments, in 2014 during a private conversation with his mistress V. Stiviano. In the conversation, he rebuked Stiviano for posing in a picture with Basket Ball Hall of Fame, Magic Johnson and posting the picture on Instagram. He is quoted to have said he was worried about Stiviano's association with black people and the fact that she could sleep with black people. At the tail of the conversation, he warned Stiviano not to bring blacks into his games.

The comments which were made private, however, came into the public domain when it was released by TMZ Sports on April 25, 2014. The comment affected the league greatly, and Clipper team players expressed their disaffection by wearing their shirts inside out to hide all logos of the team. They had previously decided to boycott about four games. Several players, managers, and owners spoke against Sterling’s comment terming are as offensive, appalling and very sad. The comment had nationwide criticism as President Barrack Obama termed it as very a very offensive racist comment.

Some sponsors of the team, including Chumash Casino, Virgin America, and CarMax also redrew their sponsorship. With this, the NBA commissioner Adam Silver announced on April 29, 2014, the ban of Sterling from the league, fined $2.5 million and also banned him from entering Clippers facilities and from attending NBA games. This the harshest ban ever to be imposed on a professional sports owner. Sterling’s wife Shelly negotiated the sale of Clippers for $2 billion to former Microsoft CEO Steve Ballmer. Donald Sterling resisted the move with several lawsuits, but eventually, Shelly was given the go-ahead, and the deal was completed on August 12, 2014.

Donald Sterling has been involved in several lawsuits including sexual harassment and racial discriminations. He was sued by Christine Jasky, his property management consultant and a former worker at the Clippers in 1996. She sued him on counts of repeatedly offering her sex for money and engaging her to recruit sexual partners for him. Sterling however countersued but later reached an out of court settlement in 1998.

Donald Sterling's property supervisor Summer Davenport who was fired by him in 2002 also sued him in 2003 for sexual harassment "unwanted and offensive physical conduct." However, her claims were revealed to be false, and she lost the case at a jury trial in 2005. Sterling has also faced several racial discrimination charges. He was alleged to have made unsavory comments on his Africa-American and Hispanic workers. He is alleged to have said "black people smell and attract vermin" while "Hispanics just smoke and hang around the building".

With his decision to rent to only Koreans, Donald Sterling was sued in 2003 by the Housing Rights Center of Los Angeles for housing discrimination. Several other suits involving his refusal to rent to blacks, Hispanics and families with children had followed, and he has been fined on many occasions for such acts.

Donald Sterling married Rochelle “Shelly” Stein in 1955. The couple had three children, Scott, Chris, and Joanna. Aside from his wife, he went into a relationship with Alexandra Castro in the late 1990s. Knowing that Sterling was married, Castro agreed to Sterling’s contract which restricted her from seeking palimony when they had broken up. Palimony is a law which enabled the unmarried couple to seek for the division of assets after a breakup. With this, Sterling sued Castro in 2003 to seek the return of a house he bought her during the relationship. The two however reached a confidential out of court settlement in 2004.

Shelly kicked Donald Sterling out of their mansion in Malibu, California after a Christmas dinner when she heard him argue with a mistress on phone. Their marriage almost broke up in 2015 as his attorney Bobby Samini confirmed in an interview with KABC-TV on August 5, 2015, that Sterling was seeking a divorce. Nonetheless, Donald Sterling and Shelly were able to resolve their differences as stated by Samini to the Los Angeles Time in March 2016. As of 2012, Donald Sterling was undergoing treatment for prostate cancer and was developing Alzheimer’s disease.