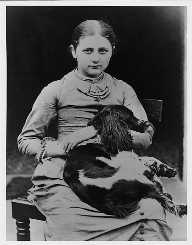 Beatrix Potter is famous for her writing skills. She is also a natural scientist, illustrator, and conservationist among other professions. She was born on July 28th in 1866 in Kensington, London. She had a passion for sketching animals and writing stories to go with their respective sketches. Her career as an author of children’s books began in 1902. During this period, she printed out The Tale of Peter Rabbit. After the release of her first children’s books, other similar books were also published. Among her famous tales that remain as children classics include the tales of Peter Rabbit, Benjamin Bunny, Jemima Puddle-Duck and many more. Beatrix Potter passed away at the age of 77.

Beatrix Helen Potter was born on July 28th, 1866. Her father Rupert William was a professional lawyer while her mother Helen Leech was also talented regarding art. In spite of her father’s law education and profession, he never practiced. Rather, he opted to focus on his passion for photography and art. It is through her parents’ exposure that Potter crossed paths with renowned artists back in the day like John Everett Millais, a professional painter.

Potter had a younger sibling called, Walter Bertram. Together, they shared an interest in animals while they were still young. Whenever their family went on vacations, the two used to roam the countryside. Right from the time Potter was young, her prowess in sketching was evident. From her sketches, it was easy to notice that she focused primarily on animals. Her motivation came from reading classic books such as Book of Nonsense-written by Edward Lear. She also used to read The Water Babies-written by Charles Kingsley.
Soon, Potter’s amazing works depicted her talents. Her father’s friend, Sir John Everett, a painter, noticed this.

By the time 1890 clocked, Potter had commenced publishing greeting cards of her own that would be used during the holiday season. She used her pet, Benjamin Bunny for her illustrations. Soon, they were famous all over, and this prompted the purchase of her works by Hildesheimer and Faulkner company.

With the help that Potter gained from Norman Warne who was her editor, she managed to release up to 3 small books every year which later totaled to 23 books. The death of Norman Warne a few years later was a major blow to Beatrix Potter’s career.

In 1905, Beatrix Potter got betrothed to Norman Warne. Initially, her parents were against their relationship for reasons that Norman was “in trade” which made him not a good fit socially. Unfortunately, the couple’s engagement lasted for one month as Warne passed away after suffering from leukemia. When Potter was 47 years old, she wedded William Heelis, an attorney. This couple did not have children together.

Beatrix Potter passed away on December 22nd, in 1943. She had been suffering from pneumonia and cardiovascular disease. Potter died at the age of 77.