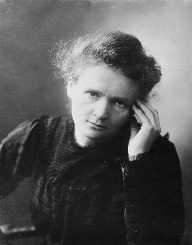 Maria Salomea Sklodowska was a Polishnaturalised French physicist and chemist. Born on November 7, 1867, Marie Curie was a pioneer in the research of radioactivity. She made several groundbreaking research in science especially in the field of physics and chemistry, and her contributions to the field cannot be underrated. Marie Curie developed the radioactivity theory and the techniques for isolating radioactive isotopes. Through her research, she discovered two elements namely, polonium and radium. Marie Curie  was the first woman to win a Nobel Peace Prize and the first to win it twice in two different science fields, Physics, 1903 and Chemistry in 1911. Marie Curie  was the first woman to aprofessor at the University of Paris.

Marie Curie was born on November 7, 1867, in the Russian partition of Poland to Bronislawa nee Bogusky and WladyslawSklodowski. He was the youngest child five with other siblings being Zofia, Jozef, Bronislawa and Helena. Wladyslaw Sklodowski was a physics and mathematics teacher and also a director of two Warsaw gymnasia. Her parents were involved in Polish national upbringing which was aimed at restoring Poland’s independence and through that; they lost all their properties and fortune.

After the Russians authorities ordered the cancellation of laboratory instruction from Polish schools, he sent his entire laboratory equipment home for the use of his children. The family suffered greatly under the Russian authorities as Wladyslaw Russian supervisor fired him and had to take a low-paying post. They had to lodge boys in their house in order to earn some money for the family’s survival. Maria mother died of tuberculosis when she was ten years and her older sister Zofia also died of typhus, which she contracted from a border.

Marie Curie  started her education at the boarding school of J. Sikorski and later entered into the gymnasium for girls and graduated with a gold medal on June 12, 1883. Marie Curie  found it difficult to enrol in a regular higher education institute because she was a woman. However, Marie Curie  alongside her sister Bronislawawere able to enrol in anunderground Flying University, Polish patriotic institution of higher learning which secretly admitted women students. In order for her sister Bronislawa to enter into medical school in Paris, she took a position of tutor and later as a governess to support her financial, so that her sister would also support in two years’ time.

Bronislawa invited Marie Curie to Paris in 1890 after completing her education. Nonetheless, Marie Curie declined the invite because of her financial status that made it difficult for her to pay for her tuitionat the time. During this time, Marie Curie  was self-taught by reading widely while also worked as a governess. Marie Curie  later leftSzczuki to join her father in Warsaw where she also tutored and at the Flying University. From 1890 to 1891, Marie Curie  began her scientific-practical in the chemical laboratory at the Museum of Industry and Agriculture at Krakowskie Przedmiescie 66 which was run by her cousin. After a year and a half, she gathered enough money and her father also supported her financially.

Marie Curie  who became Marie during her stay in France began a scientific career after her second degree in France. Marie Curie  was commissioned by the Society for the Encouragement of National Industry to research into magnetic properties of various steels. It was during this time that a Polish physicist Professor Jozef Wierusz-Kowalski introduced her to Pierre Curie, her future husband. Marie Curie was looking for a larger space to embark on her research, which Pierre occurred her though he did not have a large laboratory. The professional relationship later turned into a love affair. Marie Curie  returned to Poland, Warsaw to find a job at the Krakow University but was denied because she was a woman. Pierre then convinced her to pursue a PhD back in France.

Marie Curie  and Pierre undertook several types of research but since they did not have their own laboratory, they worked under dilapidated conditions, in laboratories with poor ventilation, which exposed them chemicals, and radiation. The Curies aside from their research taught to earn a living. Her researchwas supported bysubsidies from various organisations, government and mining companies.

Marie Curie had earlier believed that Uranium contained other elements that could be more active than uranium. This prompted her deep research into uranium and later was joined by her husband. The Curies upon several investigations announced the existence of the element, polonium in July 1898. The name of the element was in honor of her homeland, Poland. The coupled on December 26, 1898, announced the second element, radium. It was through their research that they came up with the term radioactivity. From 1898 to 1902, the two published 32 scientific papers. They also announced that radium was able to destroy disease and tumor-forming cells faster than healthy cells when one is exposed to it. Marie joined École Normale Supérieure in 1900 as the first woman faculty member.

While serving as a governess in Szczuki with the Zorawskis family, she fell in love with their son KazimierzZurawski who became a prominent mathematician. However, Zorawskis family objected to the relationship. Marie Curie married Pierre Curie on July 26, 1895, in Sceaux. The couple was blessed with two children, Irene Joloit-Curie and Eve Curie. Marie Curie  died on July 4, 1934, from aplastic anaemiaat the Sancellemoz sanatorium in Passy, Haute-Savoie. The ailment is believed to have been caused byextensive exposure to radiation. Marie Curie kept test tubes containing radioactive isotopes in her pocket and also stored some in her desk drawer which affected her health.

Marie Curie won two Nobel Peace one in Physics, 1903 and the other in chemistry, 1911. That made her the first woman to receive the Prize and also the first to win it in two different disciplines. She was also awarded a Davy Medal, 1903, Matteucci Medal, 1904 and the Actonian Prize in 1907. In 2011, Poland and France the year as Marie Curie Year while the United Nations also declared it as International Year of Chemistry. She has been given Honorary degrees by several universities and had been named on several locations, institutions and establishment around the world.