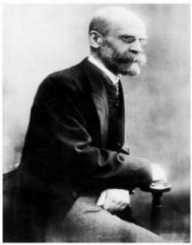 Emile Durkheim was a French sociologist, philosopher, teacher, and psychologist. He was extremely remarkable in what he did and is credited with being one of the inventors and foundation layers for the modern sociological theory. He indeed is the principal architect on sociology and was revolutionary in the sector, by introducing a new scientific approach to it.

Emile became France’s first professor in sociology and is responsible for setting up the first European department of sociology. More so, Emile is viewed as one of the greatest intellectuals to have ever lived and remained a force to reckon with in the French intellectual scene for all his life.

David Emile Durkheim was born on 15 April 1858. He was born in Epinal, Loraine to Moise Durkheim and Melanie Isidor. His families are believed to have originated from a French Jew Ancestry and were the rabbi. As the tradition, Emile was first enrolled in a rabbinical school for his early studies, but he soon changed schools and did not go down this path. From these early days, he is said to have led a secular life. He held views that religious phenomena were based on social factors as opposed to the common belief of social factors.

In 1879, Emile joined Ecole Normale Superieure to pursue his studies, after trying unsuccessfully for two times previously.  While there, he shared the class with some of the most intelligent people that are recognized from his time. An example is Jean Jaures and Henri Bergson.  Emile studied and classicist Fustel de collages. He developed a different approach to sociology and became more interested in its scientific method.

The French system did not have any curriculum at the time. Emile found sociology more interesting compared to philosophy, ethics, and psychology. In 1881, Emile suffered from a severe illness that affected his studies and led to his aggregation in philosophy as he graduated the following year. After graduation, he worked as a teacher in provincial schools up until 1887

Emile moved to a university of Marburg in Berlin Germany for further studies in psychology.

In the year 1886, Emile Durkheim was already coming up with the scientific approach to sociology. He was done with a draft of `The division of labor in the society.’ This was part of his doctoral dissertation. He came up with articles on German social science and philosophy during his time in Leipzig. These were much due to the inspiration of German philosopher and Psychologist Wilhelm Wundt. The reports drew a lot of attention in France and brought along great recognition and fame.

In the year 1887, Emile’s career, especially in the teaching part, took a big step forward. He was employed at the University of Bordeaux, who had just introduced a social science course in their curriculum. And became a lecturer. More so, he was awarded an honorary title. Following this, he spread out this social science curriculum to the French school system. This caused major reforms in the order, as there was no such curriculum before. As stated earlier, he held a contradictory belief that religion was based on social causes rather than divine causes which invited a lot of critics his way.

Emile Durkheim also researched and studied various cases in the sociological sector. In 1897, he studied a model of a proposed communal monograph and published its case study named `Suicide.’ Here, he focused on rates of committing suicide and concentrated on Protestants and Catholics as his case study. More so, Emile came up with quantitative methods for studying causes and relative distribution of crime during this case study.

Emile founded the earliest ever French social science journal in 1898. Its name was L’Annee sociologique. He had gained a large number of students and other socialists who coincided with his views and helped him develop his sociological program. He founded the journal mainly because of these students and collaborators, to help them publish and publicize their work.

In 1902, Emile Durkheim became the chair of education at Sorbonne in Paris. He was held in high regard and had significant influence on the new generation of teachers and the ministry of education. In 1912, he documented his views that religion was mainly based on social causes, on a publication called `The Elementary Forms of the Religious life.’

Emile Durkheim was extremely devastated by the start of the world I war. It is alleged that many of his students were taken up in the army and died during the war. More so, his son called Andre died on the war front, and this broke his spirit even more. He became emotionally devastated and succumbed to a stroke in Paris on November 15, 1977. His burial took place at Montparnasse cemetery, Paris.

-Publication of `The division of labor in society’ in 1892. This was concerned with nature of human society.

-Came up with `Rules of the Sociological Method.’ This brought a scientific approach to sociology.

Emile Durkheim got married to Louise Dreyfus in 1897. The couple had two children Marie and Andre. His wife became his secretary and helped him in proofreading. As stated earlier, he lost his son Andre during World War I, at the battlefront.