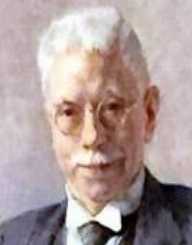 Dutch physicist Pieter Zeeman was born on the 25 May 1865 in Zonnemaire, on the isle of Schouwen, Zeeland in the Netherlands His parents were Catharinus Zeeman, and Wilhelmina Worst, a clergyman on the island at the time of his son’s birth.

Pieter Zeeman did his secondary school at Zierikzee, Schouwen then went to Delft where he studied classical languages for two years. He boarded with the Lely brothers in Delft and had the opportunity to meet Kamerlingh Onnes, who won the Nobel Prize in Physics in 1913, In 1885 Zeeman began studying at Leyden University and was taught by physicist Hendrik Lorentz. In 1893 he was awarded his doctorate.

In 1890 Pieter Zeeman was appointed an assistant to his former teacher Lorentz, and this gave him the opportunity to collaborate on a large research programme into the Kerr Effect. After obtaining his doctorate in 1893, he moved to F. Kohlrausch's Institute at Strasbourg where he worked under E. Cohn for one semester. He then returned to Leyden University in 1984 and worked as a lecturer between 1885-1887.

Pieter Zeeman discovered the magnetic splitting of spectral lines in 1896, and in 1897 he was given a lectureship at the University of Amsterdam. In 1900 he was appointed as Extraordinary Professor and in 1908 was chosen as Director of the Physics Laboratory. A new laboratory was built in 1923 and is today known as the Zeeman Laboratory of Amsterdam University.vcZeeman held both positions at the university until retiring in 1935.

Apart from his research and discovery into the field of the magnetic splitting of spectral lines, Zeeman also worked on the Doppler effect in optics and canal rays.

In 1892 Pieter Zeeman was awarded a Gold Medal from the Dutch Society of Sciences. In 1902 he shared the Nobel Prize in Physics with Hendrik Lorentz (his former lecturer) for his discovery of the Zeeman effect.

Pieter Zeeman married Johanna Lebret in 1895 and remained married until his death in 1943. They had four children.

Pieter Zeeman died on the 9 October 1943 in Amsterdam in the Netherlands.

Hobbies included a love of literature, drama, and theatre.