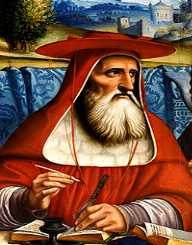 He studied in Rome, and on weekends he would visit the catacombs where the Apostles were. Jerome wrote that it reminded him of hell.

Jerome initially scoffed at Christianity, but later converted. He traveled to Gaul with his friend, Bonosus, and he began his theological studies.

In 373, Jerome undertook a long journey through Asia Minor, Thrace, and Syria. Several of his Christian friends accompanied him. He became very ill on more than one occasion. Due to his illness, he had a vision which saw him leave his study and become devoted to God.

He stayed for quite some time in the desert of Chalcis, and he spent his time both studying and writing. During this period, he also learned Hebrew.

Jerome became ordained when he returned to Antioch around 378. He then spent two years in Constantinople to study the Scriptures. The following three years he spent in Rome working for the Pope.

While he was in Rome, Jerome began his revision of the Latin Bible. He revised it from the Greek manuscripts, and it was called the Latin Vulgate Bible. It became his opus and took him many years to complete.

Sentiment in the Roman clergy grew against Jerome because he had turned his back on them. When Pope Damasus I died, Jerome left Rome to escape persecution.

Jerome returned to Antioch in August 385. His brother and some friends traveled with him, and he became their spiritual leader. The group visited the Holy Land, visiting Galilee, Jerusalem, and Bethlehem. They then visited Egypt.

In 388, Jerome returned to Palestine. He spent the rest of his years working near Bethlehem in a cave. Jerome was a prolific writer, and in the last 34 years of his life, he produced many important works.

Jerome translated the Old Testament from the original Hebrew text, which was a massive undertaking. Other works include his dialogue against the Pelagians and his polemics. Jerome also wrote a lot of spiritual commentaries.

He is one of the Fathers of the church. As a result, the Catholic Church, the Lutheran Church, Anglican Communion, and others, worship him.

His main shrine is in Rome, Italy, in the Basilica of Saint Mary Major.