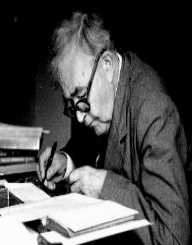 Karl Barth is a Swiss religious author and theologian. He is among the greatest theologian of the 20th century. In 1962 he featured in the cover of Time, which was an honor. He is remembered for his great works like Church Dogmatics and The Epistle to the Romans. His career began in Germany where he served as a professor. He left during Hitler’s and Nazi regime for he was not a fan of his leadership. He actively participated in preventing the Nazis from establishing a new regime in churches. He even wrote the Barmen Declaration as a way to criticize Nazi’s supporters. Karl Barth was a great influence on many, especially other theologians. A particular novelist named John Updike was greatly influenced.

Karl Barth was born on May 10th, 1886. His place of birth was Basel in Switzerland. His father was Johann Friedrich Barth. He was a pastor and theology teacher. His father significantly influenced Karl Barth. His mother was Anna Katharina Barth.

Karl Barth took his Theology studies in Bern, Berlin, Tübingen, and Marburg. This was from 1904 to 1909. He loved the work Friedrich Schleiermacher which was of great influence to him.

Karl Barth served as a devoted minister in the parish for ten years. This was from 1911-21. World War I influenced many of Barth’s teachers to forsake the gospel. Barth was quite disappointed. He then decided to seek a different foundation of theology by rereading and interpreting scripture. He joined Dialectical Theology after the war ended. The emphasized that God as the sole founder of Christian doctrine. He authored The Epistle to the Romans. The book was published in 1922. This was after he did thorough research to the letter Paul wrote to the Romans.

He served as a professor at the University of Bonn. In 1935 he was dismissed from the university. He was supposed to swear an oath to Hitler, but he turned it down. After the dismissal, he served at the University of Basel. This was a university in Switzerland. Later in 1938, another book he authored was published. It was titled The Holy Spirit and the Christian Life. He authored a book with Hans-Joachim Iwand in 1947. It was named Darmstadt Statement.

Karl Barth wedded Nelly Hoffmann in 1913. She was a Violinist. They were blessed with five children, four sons, and a daughter. One of their sons Markus Barth grew up to be a New Testament scholar.