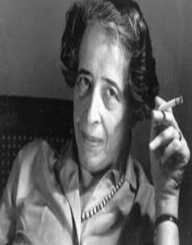 Hannah Arendt was an American political theorist and a philosopher. Her work was majorly on Jewish affairs and totalitarianism affairs after World War II. Her books and articles have influenced the political theory to date.

Hannah Arendt was born on October 14th, 1906 in Hannover, Germany. She was raised in a Jewish cultural setup. At the age of seven, Arendt lost the father. Following her father's death, her mother with the support of her grandfather raised her.

Hannah Arendt completed her secondary education and joined the University of Marburg. Her mentor at the university was Martin Heidegger. The two are said to have had a romantic relationship.

In 1928, she got her Ph.D. in philosophy at the University of Heidelberg, after completing her thesis under the supervision of Karl Jaspers.

Trouble started when Hannah Arendt assembled evidence incriminating the regime on anti–Semitism. She was briefly imprisoned for false accusation. On her release, she was forced to flee Germany for Czechoslovakia then to Switzerland before finally settling in Paris.

After the German Invasion in France, she was detained as an alien. She later found her way to the United States of America, where she settled in New York. She managed to gain her U.S Citizenship in 1950.

In 1929, Hannah Arendt married her first husband, Gunther Stern. The marriage however ended in 1937. Three years later he married Heinrich Blucher from 1940 to 1970.

In France, Hannah Arendt's wartime experiences helped her find a job in an organization that helped in rescuing Jewish children from Europe. Eight years after moving to the U.S, she wrote The Human Condition, a philosophic masterpiece that was drawn from the ancient Greek tradition in comparison to the modern the modern work.

She covered Adolf Eichmann's trial in 1961 working for a magazine, The New Yorker. Some of her views in her story have however been criticized over time.

At the age of 61, Hannah Arendt was appointed a philosophy professor at the New School for Social Research based in New York.

Her final piece of work was The Life of the Mind, she was not, however, to complete the job before her sudden death.

Hannah Arendt had a heart failure which led to her death on 4th December 1975. Most of her work has been stored in Campus of Bard College.