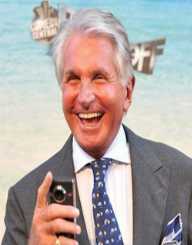 Born on August 12, 1939, George Steven Hamilton is an American film and television actor. With his talent and impeccable skills coupled with his seriously on set, he starred in about 80 films throughout his career. After making his debut as Robert in Crime and Punishment U.S.A, in 1959 which won him the Golden Globe Award, Hamilton did star in films like Home from the Hill, 1960, Your Cheatin Heart, 1964 and Love at First Bite.

George Hamilton was born on August 12, 1939, in Memphis, Tennessee to George Spike Hamilton and Anne Steven. He was the eldest son of his family. His father was a touring society bandleader, which made the family frequently move from one place to the other. He attended the Palm Beach High School, West Beach, Florida, where he partook in several activities being athletic and arts.

After his high school education, George Hamilton moved to California, where his good looks and persona gained the attention of Metro-Goldwin-Mayer (MGM) and subsequently signed a contract. He made his acting debut in 1952 in Lone Star as Noah but was not credited for his role. In 1959, he made his big-screen debut in the film Crime and Punishment, which earned him a Golden Globe Award for New Star of the Year-Actor and several other nominations including BAFTA Award for Best Foreign Actor. In 1960, he featured in one of his best Metro-Goldwin-Mayer films, Where the Boys Are in 1960. He began to be on the ascendancy and gained a role in The Light in the Piazza in 1962 which also earned him a nomination for BAFTA Award for Best Foreign Actor.

A year later, George Hamilton had a role in a World War II film The Victors alongside George Peppard. In 1964 he depicted country music legend Hank Williams in the biopic Your Cheatin’ Heart and also featured in Evel Knievel the biopic of the motorcycle daredevil in 1971. He had in 1967 played a role in the drama A Time for Killing. Hamilton continued to exhibit his talent in the blockbuster hit Love at First Bite in 1979 which projected him into the limelight. The film was a box office success and gained him several acclaims.

George Hamilton repeated the impressive skills in the film Zorro, the Gay Blade which also gained him a nomination for the Golden Globe Award for Best Actor-Motion Picture Musical or Comedy. He also had roles in films like The Godfather Part III, 1990, and Columbo, Doc Hollywood, 1991, Once Upon a Crime, 1992, Bulworth, 1998, Off Key, 2001 and Rumour Has It among several others.

George Hamilton's first publicly known relationship was to the US President Lyndon B. Johnson’s daughter Lynda Bird Johnson in 1966. Later in 1972, he got married to actress Alana Stewart and was blessed with a son, Ashley Hamilton in 1974. They divorced in 1975 but later in the 1990s, they reunited. He had another child George Thomas Hamilton with Kimberley Blackford born in 1999 with an ex-girlfriend. Hamilton disclosed in an interview that he had dated four miss worlds. He has also been involved with Imelda Marcos, the widow of ex Philippian President Ferdinand Marcos.

George Hamilton has also been involved in several business ventures. He launched the George Hamilton Sun Care System and George Hamilton Skin Care and even tanning salons in the 1980s. In the 1990s he opened cigar lounges in New York and other locations bearing his name and also had some cigars bearing his name. He served as a panelist on Match Game in 1998 and hosted The Family series on ABC in 2003. Hamilton at age 66 competed in the season two of ABC’s Dancing with the Stars but was eliminated in the sixth round. In 2009, he was the executive producer for the film My One and Only based on his relationship with his mother at his early age.

George Hamilton won the Golden Globe Award with the film Crime and Punishment U.S.A, in 1959. He also received nominations for several awards. He was honoured with a Walk of Star at the Golden Palm Star, Palm Spring California in 1999. On August 12, 2009, he was also honoured with a star on the Hollywood Walk of Fame.