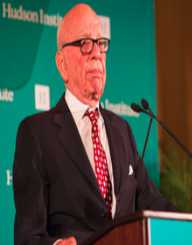 Rupert Murdoch was born on March 11th, in 1931. His birthplace was in Melbourne, Australia. He is a renowned businessman primarily for being behind the establishment of News Corporation. Just like his father, he pursued the newspaper business that got him to where he is today. After his father’s death, Murdoch took over from the papers that he owned including the News and Sunday Mail. He did not just stop here as he expanded his business by acquiring other newspapers that were struggling in the market. Later on, with major success behind him, in 1985 he bought the 20th Century Fox Film Corp. It did not take long before launching Fox News.

Rupert Murdoch was born with his given name Keith Rupert Murdoch on March 11th, 1931. His father was called Sir Keith Murdoch while his mother was named Dame Elisabeth Murdoch. Just like Murdoch, his parents were Melbourne-born individuals. His father was a celebrated journalist in Australia as he owned several newspapers such as Courier-Mail which was supplied in Brisbane, Herald in Melbourne, Sunday Mail and the News.

Because Murdoch’s father was a respected journalist during his time, Rupert Murdoch also followed his footsteps as he was nurtured into the world of publishing. He enrolled at the Geelong Grammar School for his early education. At this time, he used his academic skills in being the co-editor for The Corian which was one of the school’s journals. After graduating from the institution, he went for his higher studies at the Worcester College at Oxford University situated in England.

Around this period, in 1952, his father passed on. This left him as the sole inheritor for the newspapers that his father used to run including Sunday Mail and the News. These were circulated in Adelaide. Before fully taking up the operations that his father left behind, Rupert Murdoch first went to London where he took lessons from Lord Beaverbrook who worked at the Daily Express newspapers in London. In 1953, Murdoch was now ready to take over his father’s growing empire. At this time, he was in his early twenties.

Rupert Murdoch, now the head of the News and Sunday Mail, not only controlled the way of doing things around. He also participated fully in any operations relating to running the newspapers. For example, he engaged himself in writing headlines for the papers, did typesetting, designing of page layouts, and was also involved in the printing process. Relying on his guts, he turned the News into something different. This paper changed to feature sex, crime, and other scandals. This was a move that was received with numerous criticisms. Nonetheless, it improved the paper’s circulation as it gained popularity quickly.

With time, the business grew gradually, and it was in 1956 that Rupert Murdoch bought the Sunday Times which was circulated in Perth. He went on to structure it into the channel that the News was now following. This happened only three years after taking over from his father. Sydney market was doing well, and Murdoch made a dive into it by buying the Mirror in 1960. This paper was struggling at that time. With the experience that Murdoch had now acquired in the industry, he progressively converted the Mirror into the leading afternoon newspaper in Sydney.

Over the years, Murdoch grew the paper business into something that his father would be proud of. With the passion that he had, he initiated a national newspaper that would circulate all over Australia. This was the Australian-1965. Doing this contributed to a huge boost in his already growing public image.

Three years down the line, the Australian was valued in the market at $50Million. His success encouraged him to diverse his business into the London market. Murdoch bought The News of the World which was a highly successful Sunday paper in London. In a year’s time, he had purchased the Sun which was not doing well in the market. He went on to turn things around for the paper by featuring news on sports, sex, and crime. This was a move that he had successfully made in the Mirror a few years back. The strategy also worked for the previously struggling paper.
His next place to invest in was in the United States.

In 1973, Rupert Murdoch purchased San Antonio News, a tabloid based in Texas. After a year of operating in the market, he made a big move by establishing the Star. This was a national newspaper. Following this successful investment, he again bought New York Post in 1976. It is after this purchase that he later went on and founded News Corporation AKA News Corp.

Murdoch quest for success in the newspaper industry did not stop there. During the period from 1980 to 1990, there are numerous papers that he acquired to his media empire including Chicago Sun-Times, New York, the Village Voice and several others. He was also doing the same acquisition in England market as he purchased Times and Sunday Times. This decade was also rewarding to Rupert Murdoch as he bought 20th Century FOX Film Corporation in 1985. Branching out, he acquired other media stations and brought them together under one umbrella, FOX, Inc.

Over the years, his News Corp. establishment was still growing with major acquisitions from all over. Recently, in 2005, his new acquisition was the Intermix Media. Shortly after this, Murdoch hit the headlines with a major acquisition of Dow Jones. This paved the way for highly acclaimed publications such as The Wall Street Journal.

In 1956, Rupert Murdoch tied the knot with Patricia Booker. The pair had one daughter before separating in 1965. His second marriage was to Anna Torv which occurred in 1967. During their marriage, they had four children. In 1999, they divorced. It only took 17 days before marrying for the third time to Wendi Deng whom they had two children together. The couple divorced in 2013 before Murdoch got married to Mick Jagger ex-called Jerry Hall in 2016.