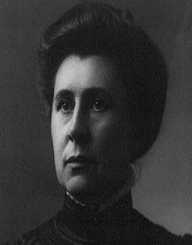 Ida Minerva Tarbell was born 5th November 1857, to Franklin and Esther Tarbell. She was born in Erie County, Pennsylvania, in the United States. She was the eldest of four children. Her father was a teacher and later became an oilman, her mother was also a teacher.

Although the Panic of 1857 left the family in dire straits financially, they soon began to get back on their feet when the oil fields of Pennsylvania started to develop in 1859. The family took advantage of the oil boom until 1869.

When Tarbell graduated from high school in 1876, she enrolled at Allegheny College to study biology but also became very active in different groups and societies, including the Women’s Literary Society. In 1880, she graduated with her degree, and in 1883, she earned her master’s degree.

In 1880, Ida Tarbell relocated to Ohio to begin teaching, where she taught languages and science subjects. She returned to her home two years later, deciding that teaching was not for her.

Shortly after her return, she met the editor of The Chautauquan, Theodore Flood. The Chautauquan was a publication that assisted with home study courses, and Tarbell accepted Flood’s offer to work there. In 1886 she became the managing editor.

After a disagreement with Flood, Tarbell left, and in 1891, she moved to Paris. She shared a flat with three other women, and she was soon ensconced in the social life of France. She initially supported herself by working as a correspondent for several American newspapers. During this period, she also started working on her first biography.

She was chased by McClure’s Magazine as they wanted her to become the editor, which she declined, but after much persuasion, she decided to write freelance for them. She eventually became the Paris representative for the magazine.

After completing her biography on Madame Roland, Ida Tarbell returned to the U.S. in 1894 and accepted a position with McClure’s Magazine. Her next assignment was a biography series on Napoleon Bonaparte. This was followed by a 20-part series on Abraham Lincoln. She researched the projects diligently, and both series were very successful, with readership soaring.

Tarbell decided at this stage of her career to switch from being an editor to a writer. The articles that had been published on Lincoln were put together and released as a book. The research was so in-depth that Tarbell became known as the leading authority in the U.S. when it came to Lincoln. She capitalized on this by touring and lecturing.

In 1899, Ida Tarbell accepted an invitation to become Desk Editor for McClure. She moved to New York to take up the role, and as well as her salary, she received shares in the company. Starting in 1902, she wrote a series of articles on Standard Oil. The articles were put together in 1904 and released as a book, called, The History of the Standard Oil Company. The work became the benchmark for investigative journalism, and it put Tarbell’s name on the map.

Her book on Standard Oil caused the introduction of several Acts, and it was also the cause of the Federal Trade Commission being established. In 1906 she left McClure Magazine and moved to Connecticut to join American Magazine. She eventually purchased American Magazine in conjunction with one of her colleagues. She was with the magazine until 1915, although they sold it in 1911.

Ida Tarbell then turned to write about women. She initially was against the Suffragettes as she felt they were waging war against men, but she later embraced the movement once women were able to vote. When World War I broke, she was invited by the President to be part of the Women’s Committee for the Council of National Defense. She helped other women mobilize efforts for the war from planting food to making all sorts of crafts.

In 1917, she contracted tuberculosis and was in the hospital for three months. Unbeknownst to her at the time, she also had the onset of Parkinson’s disease, but her doctor did not tell her. She did not find out until several years later. Her career continued with her writing and lecturing. She also did work for President Wilson, serving on several committees.

Ida Tarbell published 20 books and many articles throughout her career. Her autobiography, All in a Day’s Work was completed in 1939.

2000:   Posthumously inducted into the National Women’s Hall of Fame.