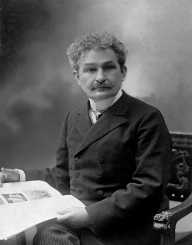 Leos Janacek is one of the foremost Czech composers of the 20th Century. He was multi-talented, and his original style of composing earned him a prominent place as a unique musician. He was also attracted to folk music. He learnt their notations and put them to great use. His first opera ‘Sarka’ was a romantic work in the spirit of Wagner and Smetana. Later he developed a distinct Czech style using characteristics of Moravian folk music. He has composed many Operas, orchestral and choral works and musical compositions for instruments.

Leos Janacek was born on 3 Jul 1854 in Hukvaldy, Moravia. His parents were Jiri and Amalie. His father was a school teacher and church organist. Janacek was a gifted child and had a great interest in music. They wanted him to pursue a career in teaching and not in music. However, he had to defer to his son’s musical abilities.

Leos Janacek received elementary musical education at St Augustine Abbey, Brno when he was ten years old. He took part in choral singing under Pavel Krizkovsky. He also learnt to play the organ. He went to an organ school in Prague in 1874 with the help of a sponsor.

Leos Janacek enrolled under Skuhersky and Blazek. He criticized the playing of Skuhersky which was published in a journal ‘Cecilie’ in 1875. This led to his expulsion. Skuhersky however intervened, and he was allowed to continue his studies. He topped the class and graduated with best grades.

Leos Janacek returned to Brno and became a music teacher. He earned a living by conducting amateur choirs. He conducted choirs, organized a symphony orchestra and also founded a school for church music. This school later became the Brno Conservatory, and Janacek was its director till 1919.

Leos Janacek taught music from 1876 at the Brno Teachers Institute. In 1876 he also studied piano under Amalie Wickenhauserova Nerudova. Janacek co-organized chamber concertos and also performed for the next two years. In Feb 1876 he was selected as choirmaster of the Beseda brneska Philharmonic Society.

In the first decade of the 20th Century, Leos Janacek composed Choral church music. These include Our Father (1901), Constitutes (1903) and Ave Maria (1904). The first part of his piano cycle, ‘On an overgrown path’ was published.

In 1902 Janacek visited Russia. He took his daughter Olga with him. She stayed back to study Russian. Janacek brought her back after three months because she was very ill. He expressed his painful feeling in a new opera ‘Jenufa.’ Olga died in Feb 1903, and he dedicated the opera to her memory. The opera achieved reasonable success, but he was unable to get its recognition in Prague. Emotionally dejected he went to Luthacovice spa where he met Kamila Urvaikova. Her love story was the theme of his next opera ‘Osud’ (destiny).

Leos Janacek continued composing, and some of his famous works are 1914 Cantata ‘The Eternal Gospel,’ Fairy Tale for cello and piano (1910), the 1912 piano cycle V In the mist and his symphonic poem ‘A fiddler’s child.’

In 1916 Leos Janacek started a long professional and personal relation with a theatre critic and dramatist Max Brod. In the same year he created a monumental orchestral work ‘Sinfonietta,’ Janacek yearned for recognition from Prague. In 1916 ‘Jenuja’ revised was finally accepted and performed in Prague. It was a great success and brought him great acclaim at the age of 62. He was awarded his first honorary doctorate from Masaryk University in Brno on his 70th birthday.

In 1926 ‘The Glagolitic Mass’ was premiered and hugely appreciated. He began work on his last opera ‘From the house of the dead.’ He passed away before it could be performed.

Leos Janacek married his student Zdenka Schulzova on 3 Jul 1881. Their married life was a happy one till the death of his daughter Olga in 1903. He got the chance to perform in Prague, and this caught the attention of singer Gabriella Horvathova. His relationship with singer Gabriela Horvathova led to strained relations with his wife. An ‘informal’ divorce was the result with both of them leading a separate life but living in the same house. Later he met Kamila Slossova a young married woman 38 years his junior who inspired him for the remaining years of his life.

Janacek died on 12 Aug 1928 in Ostrava. He was buried in the Central cemetery at Brno.